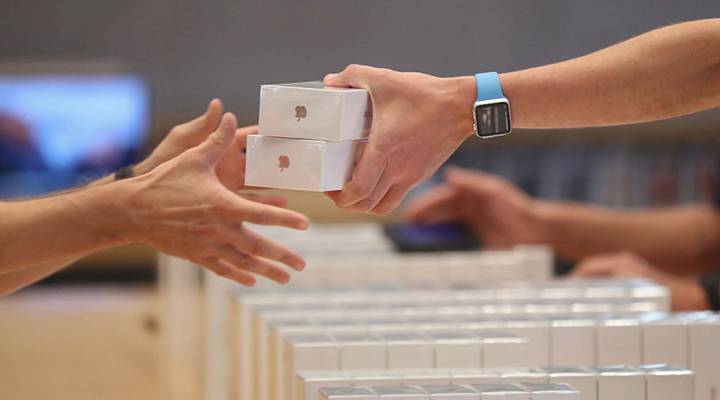 COPY
Will you be buying gifts for others — or yourself? Sean Gallup/Getty Images
Marketplace Tech Blogs

Will you be buying gifts for others — or yourself? Sean Gallup/Getty Images
Listen Now

It is Thanksgiving week and the official start of the 2018 holiday shopping season. All this week we’re partnering with the online tech reviews and news site CNET to talk about the big trends in consumer technology. This year’s CNET holiday survey reveals what users are thinking about when it comes to tech. And the research bears out what the retail industry keeps saying: It’s going to be a big, big year for shopping, especially in tech. Molly Wood talked with Lindsey Turrentine, editor-in-chief of CNET Reviews. She said it’s not just about giving gifts, either: 60 percent of the survey’s respondents plan to do at least some shopping for themselves. The following is an edited transcript of their conversation.

Lindsey Turrentine: Things are cheap. I mean, that’s really it. You know what you want. Everybody knows what they want. And then you see this parade of Cyber Week, Black Friday, Cyber Monday deals. It’s really hard not to be like, “Well, actually, I kind of want that expensive television, and I’m not going to ask Mom and Dad for that. This is the moment. It’s never going to be less expensive. So I’m going to buy it for myself.”

Molly Wood: Yeah. The survey also found that 25 percent of shoppers plan to spend more on tech this year. Is that also because tech is getting cheaper? Or is it just more mainstream?

Turrentine: I think it’s just more mainstream. So we found that, more than ever, people want to receive, for instance, smartwatches. It used to be that cellphones were at the top of our list. Now, smartwatches are at the top of our list. And we’re finally reaching a point especially with Apple Watch, let’s be honest, where it has reached mass adoption. Lots of people have them. It seems like a “normal” gift, not necessarily a nerdy gift. It’s just a gift.

Wood: Was there anything in the survey that particularly surprised you?

Wood: Let’s talk about sort of the industry broadly. Are there any surprising shakeouts with manufacturers? Are there brands that are pulling ahead that you didn’t see coming? Or [are there] companies that you’re looking at the survey results and saying, like, “Maybe you need to worry more than you thought.”

Turrentine: I would say that in the smart home category, Google is catching up to Amazon, maybe even faster than we expected it to. Alexa really was the stand-in for smart homes speakers in the past. Google is catching up really quickly. I think that Apple, while obviously a common gift brand, we are seeing a lot of interest in non-Apple phones. Google Pixel is getting a lot of attention. So we are seeing some up-and-comers start to pull ahead a little bit.

Marketplace Tech has partnered with CNET to cover buying trends in tech as the 2018 holiday shopping season starts. Topics on tap: smart home technology, the case for TVs, a surprising surge in desktop computers and whether a “techlash” against spending more time with devices is showing up in what people give.

Long and Short: Ikea, makeup, the NCAA and wireless headphones