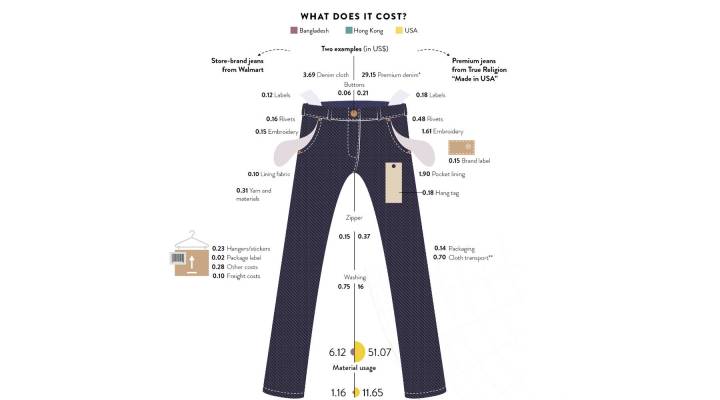 COPY
Infographic from “The Global Economy as You’ve Never Seen It” by Thomas Ramge and Jan Schwochow. Reprinted by permission of the publisher.

Infographic from “The Global Economy as You’ve Never Seen It” by Thomas Ramge and Jan Schwochow. Reprinted by permission of the publisher.
Listen Now

You know the book “The Sisterhood of the Traveling Pants”? It’s a story about a group of friends who spend a summer in different parts of the world, and to stay connected, they mail one another a pair of jeans that magically fits all of them. It turns out those magical pants aren’t the only globe-trotting jeans around.

Thomas Ramge, co-author of “The Global Economy as You’ve Never Seen It,” says a pair of jeans could travel 30,000 miles before reaching the shelves of a store. The book, co-authored with infographics specialist Jan Schwochow, uses infographics to make the complex global economy accessible to the everywoman and man. Ramge calls it “an atlas for economics.” Below are edited excerpts from Ramge’s conversation with host David Brancaccio.

Why did your team set out to visualize the world economy?

Because pictures are sometimes much easier for us humans to [understand than] words. What we’re trying to do in this book is to visualize data and visualize abstract concepts to lower the entry barriers into the complex world of economics. We started off this book with a reader in mind [who’s] interested in economics but doesn’t have the time or the energy to sift through the Wall Street Journal every morning. [We wanted to] democratize economics, which seems crucial since it affects us all.

Infographic from “The Global Economy as You’ve Never Seen It” by Thomas Ramge and Jan Schwochow. Reprinted by permission of the publisher.

(Click here to see an expanded version of the infographic.)

What does the jeans infographic demonstrate?

It shows how complex global supply chains have become. The cotton in your jeans might have been picked in Kazakhstan, the washing might have been done in Taiwan, the buttons or rivets might have come from Italy. But the distribution is organized in Europe and the United States. So jeans are a textbook example of how small and connected the world has become. On the other hand, [it shows] how efficient global supply chains have become to produce a product all over the globe and then sell it for $20 or $25 or euros in Los Angeles or Paris.

The process you’re describing is somewhat absurd. Couldn’t we have a pair of jeans made in the U.S. so we wouldn’t have as much of an impact on the planet?

You’re absolutely right. We’re trying to show processes as they are organized, but to give some food for thought about whether they are organized in the best, most sustainable way for the global economy to work.

Infographic from “The Global Economy as You’ve Never Seen It” by Thomas Ramge and Jan Schwochow. Reprinted by permission of the publisher.

(Click here to see an expanded version of the infographic.)

You call the book an atlas for the global economy. There’s a page with a flat map of the world covered in lines. What is this?

These are the transport lines of goods and people in the world. As you might have realized, we didn’t draw the borders on it. What we see here is a map of how the world is connected in reality and how densely it’s connected, especially in common markets [like] the NAFTA area or the European Union. There you see that beyond general geography, with its political borders, there’s another form of geography, [which is] the connection of people and goods throughout the world. That brings us to one of the core messages of our book. We firmly believe that the global economy is not a zero-sum game, but that if we collaborate on the global scale, if we have competition on fair terms, we all win. We can advance the world together, and that is what the global economy is all about. 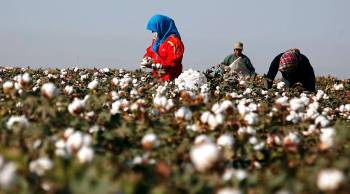