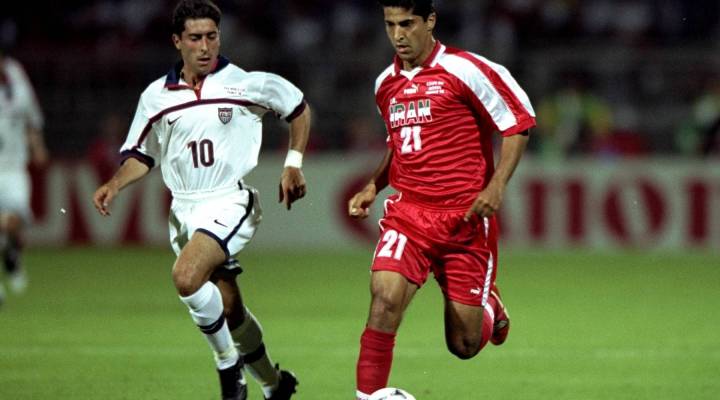 COPY
Mehrdad Minavand of Iran in action during the 1998 World Cup first round match against the USA at the Stade Gerland in Lyon, France. Iran won the match 2-1. Stu Forster/Allsport

Mehrdad Minavand of Iran in action during the 1998 World Cup first round match against the USA at the Stade Gerland in Lyon, France. Iran won the match 2-1. Stu Forster/Allsport
Listen Now

After the 1994 World Cup, being a soccer player in the U.S. became recognized as a real profession.

The U.S. team had a respectable finish that year, making it to the knockout stage of the tournament despite its defeat by Brazil on the Fourth of July.

“[It] changed everything. They were suddenly on cereal boxes. Hollywood agents were swooping around. An NFL team tried to pluck the goalkeeper and make him a kicker,” said Roger Bennett, the host of “American Fiasco,” a 12-part series on how the U.S. men’s soccer team finally saw success after the 1994 tournament and then lost it all at the next World Cup.

At the 1998 tournament, the U.S. men’s soccer team ended up finishing in last place.

“They humiliated themselves with a massive American national audience tuning in, delirious to see this soccer thing,” Bennett said.

Twenty years after its losses, the team shared its story with Bennett, who interviewed more than 30 players, coaches and media personalities about how *not* to win a World Cup. He joined us to talk about the team’s downfall and how views toward soccer — as a way to make a living — have changed over the years.

Alexi Lalas, the face of the U.S. men’s soccer team during this time, said that two weeks before the 1994 World Cup, he had been flying coach when a woman turned to him and asked, “What do you do, young man?”

After he said he was a soccer player, she replied, “But what do you do professionally?”

“Before the World Cup, it was almost impossible to make a professional living as a soccer player in the country. There was no domestic league, and very few European teams trusted American talent,” Bennett said.

Alexi Lalas in training for the 1994 World Cup soccer finals.

America hosted the tournament that year, automatically qualifying the men’s soccer team. The United States ended up advancing to Round 16 — the first time since 1930.

After the tournament, Lalas signed a lucrative contract with an Italian Serie A team and eventually got to perform as a guitarist with Hootie & the Blowfish on a European tour. And it wasn’t just the players who benefited — the whole soccer industry did, too.

“You could suddenly make a job as a journalist, as a coach. In the back office, there were hundreds and hundreds of people entering this new industry,” Bennett said.

That World Cup gave the team a newfound sense of optimism and the belief that it could win the next one, according to Bennett.

Germany defeated the United States in the country’s first World Cup game in 1998, a match where veterans from the ’94 game had been benched and eight players making their World Cup debuts took part in the game’s lineup. The loss prompted these veterans to vent to the media.

“Not only had the team lost their first game on the world stage, but they’d also lost their unity,” according to the podcast.

Bennett said that the team failed to evolve, becoming undone by success and self-interest.

In one of their final matches, the team members played against Iran and suffered a devastating defeat.

“They came dead last, scored one goal, humiliated themselves with the nation — with the world watching,” Bennett said. “And the narrative was more — it was still American, but it was more kind of like ‘Scarface’ meets ‘Apocalypse Now.’”

The podcast points out that Steve Sampson, the team’s coach at the time, had an all-out attack strategy that in hindsight left the American side of the field vulnerable.

They then played Yugoslavia, a match that was a “formality” at that point, and lost 1-0.

“I felt it was the right thing to do because I had lost three games in a world championship,” he said. “I didn’t want Alan to feel as if he needed to fire me. Before he could get it out of his mouth, I offered to him to resign from the national team.”

But there were others who saw the end of the 1998 tournament as a new beginning. Player Frankie Hejduk negotiated with a top-flight German team and headed for “the big time in Europe.”

“It ended up changing my life in probably the best way ever because I wouldn’t be here with you, doing interviews, I wouldn’t be fishing. I wouldn’t be hitting golf balls off my back deck,” Hejduk told Bennett.

And not all hope was lost for Americans.