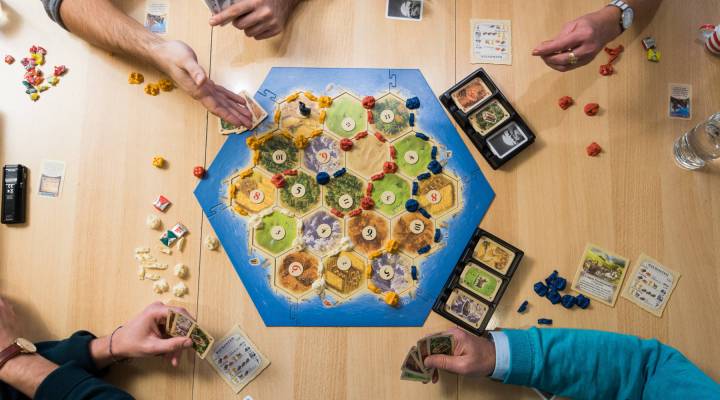 What do actress Mila Kunis, Facebook founder Mark Zuckerberg and Colts quarterback Andrew Luck have in common? They’re fans of the German board game Catan, which deals in trade and economics. Players represent tribes who have landed on the island of Catan. They jockey for the best position to collect resources, grow settlements and beat their opponents.

“It’s a really cleverly designed game that you never really know until the very end who’s going to win,” Adam Williams said as he stood with about two dozen other Catan fans at a gaming convention in Darmstadt, Germany.

Williams and the other players were at the convention to compete for a spot at the national Catan championships. Meet-ups like this can be found around the world because of Catan’s devoted  fan base — more than 27 million Catan sets in 39 languages have been sold since the game was released about two decades ago.

Now the popular board game may head to the big screen. Sony Pictures is in negotiations to acquire the rights to adapt Catan. Some fans like Williams wonder whether the game can survive the Hollywood treatment.

“If they just take the name of the game but then create something which has nothing really to do with how the game works, that would be a shame,” Williams said.

That’s also something Catan’s creator Klaus Teuber, thinks about although he wants to see it turned into a movie. He designed the game in the 1980s as a passion project while working full time as a dental technician, and he has painstakingly shepherded all Catan spin-offs. Teuber wants a movie or TV series to resonate with fans and answer their questions.

“I think they want to know where come the Cataners from? Where is Catan? How do Catan look like? I think this could be a frame for a full and rich story,” Teuber said.

Teuber said he’s open to new brand tie-ins and extensions for Catan. There’s a Star Trek Catan and a Silicon Valley-themed Catan. But all new iterations of the game should honor the core elements of the Catan story and the expectations of the fans who love it. His son Benjamin, who is one of the Catan company’s managing directors, echoed the sentiment.

“People must be like, ‘Oh, this makes so much sense.’ And it must feel good,’” Benjamin Teuber said. “If you don’t feel it, then this it’s like, ‘They want to make money’ and they would be right if we did it.”

Movies based on board games have a mixed track record. Audiences panned the movie “Clue” in the 1980s. The movie version of “Battleship” tanked with the critics but still grossed more than $300 million worldwide.

Mitchell Block is an adjunct professor at the University of Southern California’s School of Cinematic Arts. He said, despite the lack of critical success for previous board game movies, adapting Catan is a smart move and a logical next step.

“You know when you have something that is as well known as this game, and has such tremendous recognition, that’s a huge start in any brand extension,” Block said.

Catan already has the brand recognition to help with audience turnout, according to Block, and he sees little downside for the Teubers.

Those are not bad odds for people who think a lot about the art of strategy and risk.