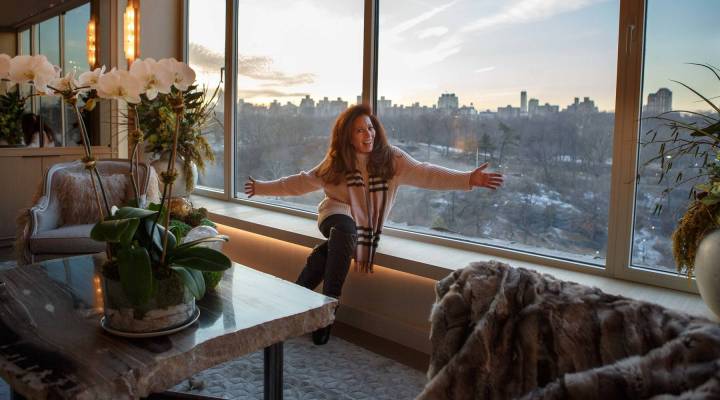 Residents of New York City pay some of the highest taxes in the country. In exchange, they enjoy some of the richest services in America: a $10 billion police force, guaranteed shelter for the homeless, a public health care corporation and 24/7 public transit (when it works).

And the city’s tax system is especially progressive — the richer you are, the more you pay. In fact, NYC’s 1 percent — those people in the top income-earning percentile of the whole city — provide nearly half of the city’s $11 billion in personal income tax revenue.

Diane Gilman is one of them.

Born in California in 1945, Gilman moved to New York at age 30 and worked her way up in the fashion industry. She started off by selling women’s clothes at Bloomingdale’s and waitressing at night. Her career had its up and downs. She was almost 50 by the time she hit it big. That year, she was invited to sell her denim line on the Home Shopping Network (now QVC/HSN).

“It was beyond my wildest dreams,” Gilman said. “I’m now the longest-living fashion personality on teleretailing, 24 years. Almost a quarter of a century.”

Gilman said her line, DG2 by Diane Gilman, clears $100 million a year in retail sales, and that she takes home more than $1.5 million. Last year, at age 71, Gilman finally moved into her dream apartment — a penthouse on Fifth Avenue that overlooks Central Park.

“That was the real dream come true,” Gilman said. “And now Donald Trump wants to take it away from me.”

Under the new tax law, Gilman said she’ll pay nearly 20 percent more after taking a hit on state and local taxes and mortgage interest deductions. She knows how it sounds when she complains. “So a few snooty elites in New York and San Francisco have to pay more taxes,” she whines, mimicking a common conservative refrain. “Big deal. Who cares about them?”

As it turns out, her state and local governments care very much. In his State of the State address last week, New York Gov. Andrew Cuomo called the tax law an “economic civil war.”

“This could cause people to leave the state of New York,” Cuomo said. “And it could reduce our ability to attract business.”

Bob Willens, a high-end tax layer in New York, said losing the full state and local tax deduction will raise taxes on the 1 percent by hundreds of thousands, if not millions, of dollars. Willens said rich New Yorkers gripe and threaten to leave at any tax increase, but that the conversation this time around is more prevalent and more serious than he’s ever seen it.

“We’ve never had a situation quite like this one where such an important deduction was taken away,” Willens said.

And because the rich provide such a high proportion of New York’s tax revenue, even a few high-net-worth individuals leaving can be felt in local budgets. That’s before even the question of whether businesses, like Amazon, which is searching for its new “HQ2,” will now build or expand into high-tax communities.

Michael Jacobson at the City University of New York said beyond money leaving New York or deciding not to come here, the new tax law will have an unknown and cascading ripple effect on state and city revenue.

For one, Jacobson said, “people will be spending less money to make up for the additional taxes they have to pay.” That will reduce sales tax revenue.

A report from Moody’s Analytics predicts that because deductions on property taxes and mortgage interest have been limited, housing prices in Manhattan could drop nearly 10 percent next year. That also will hit property tax revenue and related income streams.

“It comes at you from so many directions that it can only be bad,” Jacobson said.

In response, governments will have to cut services or raise taxes. New York City Mayor Bill de Blasio has pushed hard for a so-called millionaire’s tax, but state lawmakers are already signalling they can no longer support it.

When I tell Diane Gilman that people in her tax bracket provide nearly half the city’s income tax revenue, she said she feels blessed. But at the end of the day, she still wants a lower tax bill.

“[De Blasio’s] gonna have a revolution on his hands if he raises taxes,” she said. So she’s exploring the idea of a new penthouse … in Tampa.