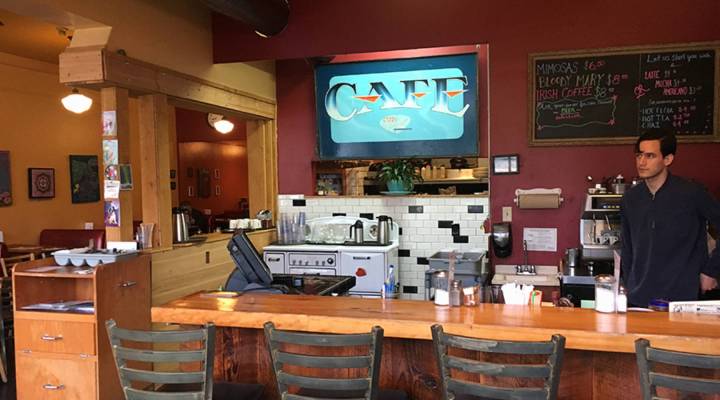 COPY
In an increasingly tight labor market, Cup & Saucer Cafe in Portland, Oregon, is always looking to hire new wait staff. The manager of this location — one of three in the city — said skilled short-order cooks are in especially short supply these days. Mitchell Hartman/Marketplace

In an increasingly tight labor market, Cup & Saucer Cafe in Portland, Oregon, is always looking to hire new wait staff. The manager of this location — one of three in the city — said skilled short-order cooks are in especially short supply these days. Mitchell Hartman/Marketplace
Listen Now

On a typical weekday morning, most of the tables and booths are full at Cup & Saucer Café in the Hawthorne neighborhood of Portland, Oregon. There are three local locations of the restaurant, which serves eggs, sandwiches, burgers and burritos in a diner type setting.

Manager Aimee Drake said she is always looking to hire. She said that finding wait staff “is relatively easy — we have anywhere from five to 10 people a week that walk in wanting a serving job.”

But she said jobs at the grill are harder to fill. “Cooks — whole different story. It is a very specialized skill, particularly for us, being a high-volume restaurant. The owner often steps in to fill in that position.”

Drake said that when the restaurant is short-staffed, customers sometimes have to wait longer for their orders. And lately, “having three Cup & Saucers, one or the other of them has not been able to open for the whole day.”

Which is money left on the table.

As the economy continues to strengthen, some companies are struggling to meet consumer and business demand for goods and services. This is especially true in the labor market, where many employers now complain of difficulty finding enough qualified workers to hire. In industries such as construction, manufacturing, and hospitality, labor shortages may be holding back businesses from adding new customers and growing faster.

Take the housing industry, for example. “The most common complaint I hear from home builders is, ‘I do not have enough workers at the ready,’” said Robert Dietz, chief economist at the National Association of Home Builders. “It is absolutely reducing the number of homes we remodel, and the number of homes that we can build in a given year,” Dietz said, adding  that shortages of buildable lots and bank financing are also a problem for builders.

In the aftermath of the housing crash and recession, 2.3 million construction workers lost their jobs, according to data from the Bureau of Labor Statistics. Many of those workers changed careers, went on disability, or retired. The workforce has recovered somewhat, but there are still approximately 750,000 fewer construction workers available now than in 2007.

But some business owners say they can’t find workers with the requisite skills, clean record and attitude, even if they raise wages. Judith Clinco, a registered nurse and entrepreneur, said this is the situation she faces with her elder care company, Catalina In-Home Services in Tucson, Arizona. Clinco has 85 employees, and said she often does a dozen interviews to find one candidate she can hire.

With a wave of baby boomers retiring, “there’s a crisis in long-term care in terms of the workforce,” Clinco siad. “We’re turning down business. In home care, you either have a body who can go, or you have nobody. And when there’s nobody to go, that means a frail elder who needs help with bathing, dressing, meal preparation, who’s not going to have anyone in their home today.”

One long-term solution to labor shortages is for businesses to invest more in automation. That won’t work well in every industry — it’s hard to automate bathing and dressing an elderly or disabled person in their home, for instance.

But Dietz said that even in a job as hands-on as construction, change is coming. “The industry is set for productivity advances,” Dietz said. “Basically, substituting capital for increasingly scarce and expensive labor, bringing in robots and other equipment at scale in high-density projects to allow workers to be more productive.”

As it gets harder to find qualified workers, though, not all businesses are having to limit their growth.

Julia Klein, CEO of C.H. Briggs, a building supply company with 200 employees in Reading, Pennsylvania, said that in the past year, she has raised salaries by approximately 2.5 percent, and even more for positions in short supply, such as commercial truck drivers. “We know we need to come out of the gate with our very best offer,” Klein said, “because good candidates will leave before we get them in the door, for even a small increase in hourly pay.”

Klein said her management team is now intensely focused on retaining talent. She said that so far, she hasn’t turned business away. Her employees are just working harder, and doing “some scrambling” to meet customer demand.