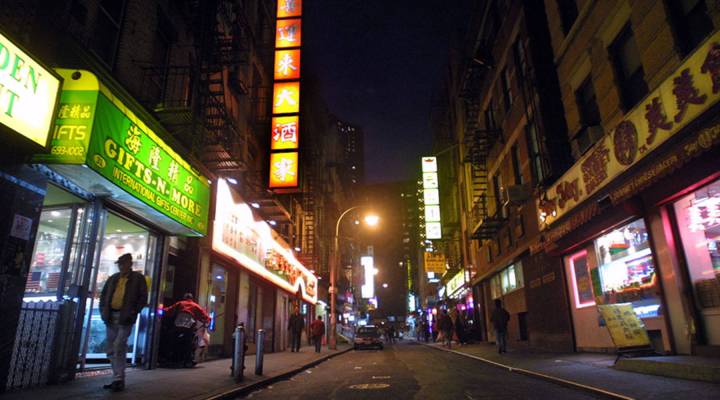 COPY
A man walks along an empty street November 27, 2001 in the usually bustling Chinatown section of New York City. Chinatown is located in Lower Manhattan near Ground Zero and has been in a deep economic slump since the September 11th World Trade Center attacks. Mario Tama/Getty Images

A man walks along an empty street November 27, 2001 in the usually bustling Chinatown section of New York City. Chinatown is located in Lower Manhattan near Ground Zero and has been in a deep economic slump since the September 11th World Trade Center attacks. Mario Tama/Getty Images
Listen Now

Lately, they’ve been coming to John Chan about money — specifically the collapse of informal lending clubs known as “biao hui.”

Biao hui are essentially informal banks made up of immigrants lending money to each other. A group — in China, this would traditionally be a group of close friends or relatives —gets together and throws money in the pot. One person acts as the organizer or banker and the money is then lent out on a rotating basis, with varying interest rates depending on how much money is needed, and when a person needs it.

For decades, biao hui have helped new Chinese immigrants — who lack American credit and employment history, or may be undocumented — to access capital they can’t otherwise. But in New York City this year, two  biao hui worth a combined $22 million collapsed.

Chan’s office is on the third floor of Golden Imperial Palace, a gigantic dim sum hall he owns. The walls are lined with some 100 framed portraits of Chan with various V.I.P.s — the Clintons, the Bushes, the foreign minister of China.

Chan acknowledges that biao hui failures have created problems even he can’t solve, despite his sway with local politicians and law enforcement. But he points out that they’ve also transformed his neighborhood. Chan walks down to Eighth Avenue, which is lined by a mile-long strip of Chinese owned businesses.

“Ten years ago, nobody would even walk down this street,” Chan said via a translator. “Now, you can’t even buy real estate here.”

Since Chan came to Brooklyn in the early 2000s, the Asian population has nearly doubled — they’re now the fastest-growing group in the borough. On this strip there are pool halls, karaoke joints, hot pot restaurant. A 20,000 square foot hotel is under construction. Chan said roughly 70 percent of these businesses were capitalized via lending clubs.

State Assemblyman Ron Kim said lending clubs have been instrumental in building another big Chinatown, in his neighborhood of Flushing, Queens.

“It’s mind-boggling, where there’s $2 to $3 million condos being sold,” Kim said. “These apartments are being sold all in cash, with no mortgages.”

Easy access to big piles of cash is exactly what makes lending clubs so attractive and so dangerous, according to Democratic Congresswoman Nydia Velazquez, who represents Sunset Park and other New York neighborhoods.

“There is not a formal contract, there is no oversight,” Velazequez said. “There is no guarantee that a person will not disappear with the money, or that some of the borrowers will be able to pay back the money that was lent to them.”

Both of those things happened in Velazquez’s district recently. In one case, the organizer of the club — the banker — ran off with $2 million. In another, a few participants stopped making their payments, which brought the $20 million dollar club crashing down. Velazquez has been holding financial literacy events across her district to educate recent immigrants about their consumer rights and encourage them to use micro-lenders or traditional banks.

But Ivan Light, a professor emeritus at UCLA who has studied lending clubs for decades, said this misses the point. “If you’re a foreign-born person, you don’t have a credit history in this country, you don’t have a high income, you have no assets … how are you going to get a loan from a bank?” asked Light.

Light said such clubs have existed across cultures for hundreds of years, and they’re not going away anytime soon. That makes lending clubs older than the U.S. banking system itself.