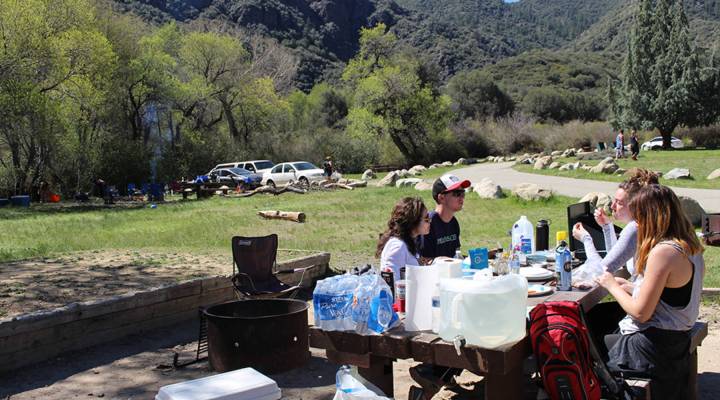 COPY
Josh Larson and his friends cook breakfast at Rose Valley Campground in the Los Padres National Forest. The campground is under private management. Kathryn Barnes

More and more campgrounds within the national forest system are not actually run by the U.S. Forest Service. They’re operated by private companies.

In the Los Padres National Forest along California’s Central Coast, for example, 52 of its 125 campgrounds are managed by a private operator called Parks Management Company.

“I’ve always enjoyed the federal land because it’s been cheap, easy to get to, enjoyable and fun,” said Josh Larson, who was camping at Rose Valley Campground in the Los Padres National Forest near Ventura, California. He and three of his friends were cooking pancakes and bacon. They had driven up from San Diego the night before.

Rose Valley Campground is one of 52 campgrounds in the Los Padres National Forest operated by a private company.

This campsite used to cost $5 a night or $30 for an annual pass. This spring, under a private operator, the fee was raised to $20 a night, with no annual option. Larson said he’s used to paying that kind of money at state and national parks, but not on federal forestland.

“I get paying a fee to help maintain the campground,” he said. “But, if you look at here, they’re starting to make a profit. And it becomes less about the people’s enjoyment and more towards a business.”

The forest service began allowing private businesses to take over its campgrounds in the 1980s as a way to stretch its budget. Today, 37 percent of campsites nationwide within national forests are run by private companies.

Rose Valley Campground is one of 52 campgrounds in the Los Padres National Forest operated by a private company.

According to Andrew Madsen, public affairs officer for the Los Padres National Forest, that’s because of budget cuts. He’s watched his district’s recreation budget get slashed by 50 percent in the last 10 years.

And increasingly, the money that’s left is going to fight fires.

“Our wildland fire program has grown exponentially over the last 15 to 20 years,” he said. “It’s now to the point where it consumes roughly 70 percent of our annual allocated budget.”

That means the Forest Service has been forced to pull resources out of other programs, like campgrounds.

“We have fewer people, field-going staff, who are able to manage these sites,” Madsen said.

Instead of shutting down these campgrounds, the Los Padres district decided to turn them over to Parks Management Company, which manages some of the most popular campgrounds in Big Sur on the Central California coast.

“We’re able to make sure that the trash is picked up,” said Gina Corrales, who works for the company. “The toilets are pumped, the toilets are filled with toilet paper and clean, roofs are fixed, fire rings are replaced, barbecues are replaced.”

With that comes a price hike, like the $20 a night fee at Rose Valley Campground. Parks Management Company wouldn’t disclose how much money it made from campgrounds in national forests last year, but of the total amount, 10 percent went back to the forest service.

To Alasdair Coyne, the director of an environmental group in Ojai called Keep Sespe Wild, that doesn’t sound like enough. He’s been camping in the Los Padres for decades.

Alasdair Coyne, the director of an environmental group in Ojai called Keep Sespe Wild, said he’s worried the price increase will discourage those with minimal incomes from enjoying the outdoors.

“We’re basically seeing the public assets, in terms of national forest campgrounds, being handed over to private profit-making organization for private profit,” he said.

But when camper Larson hears the other option is closing these campgrounds altogether, he becomes less worried about price and more concerned with accessibility.

“I would rather them be open with the higher price, even though it would kind of be a bummer, than for it to be shut down,” he said. “Because the last thing I want is for more nature stuff to be shut down.”

The forest service will likely face more financial cuts under the Trump administration.

The president’s proposed budget would slash the agency’s funding by 15 percent, potentially opening the door for more private companies to step in and fill the gap.