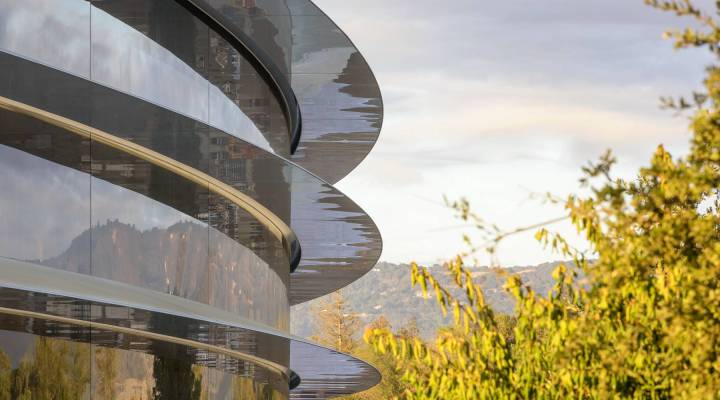 COPY
The new Apple Park campus in Santa Clara Valley comes with a great view, but will it lead to more collaboration and productivity? Courtesy of Apple

The new Apple Park campus in Santa Clara Valley comes with a great view, but will it lead to more collaboration and productivity? Courtesy of Apple
Listen Now

During lunch on a recent weekday, Carolina Donlan, who works at an outpatient clinic in New York, could be spotted outside enjoying the warm weather.

“In my perfect office, I can see outside,” she said when asked about her ideal workspace. “Have a big window. I can see the nature. I can make my own tea, I don’t have to get out. I can have a big beautiful leather couch where I can relax. I work in mental health. You have to do your own mental health.”

Donlan does not like her current cubicle. Despite personal touches she has added and low walls that she can peek over, Donlan still feels isolated from her coworkers while at work.

One of the reasons why some employers still use cubicles instead of the open-office design is to cut down on talking. Some believe that the distractions found within open-office setting lower workers’ productivity. Other companies believe that it’s the talking, the accidental interactions with coworkers that can bring out the best in their workers.

As employers — both in tech and other industries — search for the most efficient office, some answers could come from the analytics of our everyday tasks, such as emails and other communications that we exchange with our coworkers. The office of the future might use algorithms and such data, artificial intelligence could then determine where employees should sit in order to increase the probability of collaborations. Until then, some companies are using other design methods to achieve those interactions.

The 175-acre campus opened to Apple’s employees in April and feature great views, nature and hiking trails. About 12,000 people are slated to work from the space, which is located in the Santa Clara Valley and was designed by Lord Norman Robert Foster.

“It started with a phone call with Steve Jobs and a meeting shortly afterwards in Cupertino,” Foster told Marketplace during a recent interview at the 2017 Wired Business Conference. “Really it was working with Steve and realizing his vision.”

The space previously occupied by 26 buildings and contained “very little landscape,” according to Foster.

“All those buildings have essentially been scrunched up into one building, so everybody is under one roof, which is just great for communication and interaction and that 20 percent of green landscape has expanded into 80 percent,” he added.

One of the reason that companies keep investing in open-space offices and big campuses like Apple’s is to encourage collaboration. They hope that by bumping into each other and sharing ideas employees will create the next iPhone or just be a little bit more creative.

These “serendipitous interactions” can make a significant difference for a company, said Ben Waber, CEO of Humanyze, who studies behavior and workplace design. According to him, this idea that employees who are standing by the water cooler talking to each other are “not working” is outdated.

“This is the tension — especially in the U.S. — around the definition of performance,” explained Waber. “We like to think of performance as the number of emails I write or the number of reports that I complete, but actually the vast majority of the work that we do is extremely collaborative. Your work depends on the work of dozens, or maybe hundreds of people, and it’s really that output that we care about. If you spend six hours a day at the water cooler but you make 20 people you work with 10 percent more effective, then that should be your job.”

Employees of Google work at a ‘tech stop’ at the internet company’s office space inside historic Chelsea Market in New York City.

With work becoming more collaborative each day, companies might need to start measuring productivity of teams rather than individuals.

What’s more, Waber thinks that future of work will involve artificial intelligence trying to make us more efficient through collaboration. What does that look like? Kind of like the current flexible-seating office that many of tech companies already use, except instead of employees deciding where they will sit on any given day, there would be an AI to make a seating suggestion for them.

In the meantime, William Sciales, a lawyer in New York, is still enjoying having an old school office with wall and doors.

“It’s nicer than having a cubicle, for sure, because you can close the door if you need privacy or if it’s noisy outside,“ he said. After year and a half in the office, he has yet to decorate it.

Would he change anything about it? Is it his ideal office?

“Is there a perfect office? It’s an office. You go there to do your work,” said Sciales. According to him, open-offices that work for tech companies would probably not be best suited for law firms.

“Law firms have a different operating environment than technology companies,” he explained. “The people that I know that work in tech, I hear interesting stories from them about things like push up contests that go on in their offices, but they get a lot done. And they make a lot of money. So, it’s gotta be effective some way. There’s definitely more camaraderie in that kind of an office than in a quiet law firm environment. Would that same kind of an environment work for a law firm? Probably not, but for them it works.”

Does that mean they don’t have push-up contests at the law firm?

“Only on Fridays,” he replied jokingly.