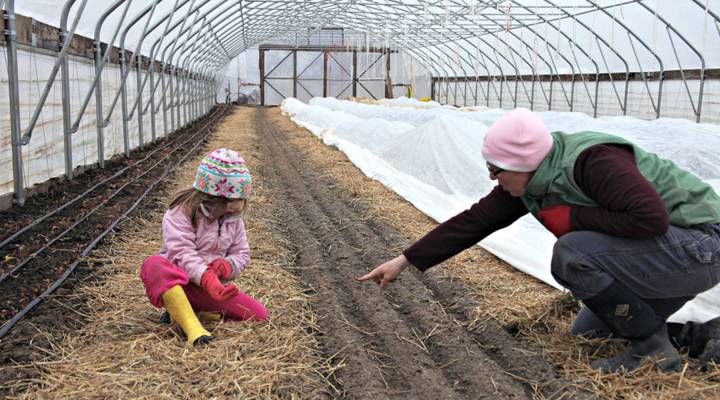 COPY
Liz Graznak and her daughter Sylvia hunt for weeds in the high tunnel at Happy Hollow Farm. Graznak worked for six years after college to save money to start her farm. Kristofor Husted/Harvest Public Media

Liz Graznak and her daughter Sylvia hunt for weeds in the high tunnel at Happy Hollow Farm. Graznak worked for six years after college to save money to start her farm. Kristofor Husted/Harvest Public Media
Listen Now

Liz Graznak runs an organic farm in Jamestown, Missouri, which she calls Happy Hollow Farm. She sells her vegetables to local restaurants in “community supported agriculture” boxes and at the farmer’s market. But eight years ago, after falling in love with the idea of growing her own produce, the farm she runs today looked like a nearly impossible dream.

While on track to earn a Ph.D. in plant breeding, Graznak bought her first box of produce from a nearby farmer. Soon after, she decided that instead of studying plants, she wanted to grow them. Easier said than done, though.

“The mortgage aside, it costs a hell of a lot of money to start a farm, and to build the infrastructure, and to buy drip tape and row cover and hoops … I mean, just everything you could imagine,” she said.

First steps for entrepreneurs: Go to a bank, take out a loan and buy some property. Not for Graznak, though, who at that point was making just a small amount as a working graduate student.

“No bank was going to give me a loan at making $8 an hour. No way. And owing some thirty thousand odd dollars in student loans,” she said. “So that’s why I got a job.”

Graznak isn’t alone. Student loans in the U.S. have run American graduates into a $1.4 trillion hole of debt. Indeed, after college, many entrepreneurial graduates are postponing their dream careers to pay off some of their loans. For many young people like Graznak, trying to start their own farm, student debt can put their dreams on hold.

After graduating with a master’s degree, Graznak ended up deferring her student loan payments, interning on several farms and then working full time at a garden center so she could save up enough money to launch her dream farm. And she did — six years later.

Organic farmer Liz Graznak, with daughter Sylvia, had about $36,000 in student debt after graduate school that she wanted to pay down before starting her dream farm.

The average age of American farmers – 58 in 2012 — keeps ticking upward. Many in the Midwest fear there aren’t enough new or young farmers entering the evolving field. The nature of modern farming has made it tough for a new generation to get started.

“I think it really is an increasing concern just because farms continue to get larger and more capital intensive,” said Kevin Moore, an associate professor of agricultural and applied economics at the University of Missouri in Columbia.

Moore teaches a class for students called “Returning to the Farm.” As part of the class, the students crunch the numbers to figure out a business plan and the economic reality of what it will take to farm successfully.

“The capital requirement of agriculture has continued to increase, which makes it more difficult for a young person to get in and to get to the adequate size that’s kind of required to be efficient and competitive,“ he said.

The numbers don’t always add up, Moore said, and some students can’t go into farming right away as planned. That’s not only OK, he said, it’s a smart choice if it’s not financially feasible. The last thing young people need is more debt.

“Our mission, as established by Congress, is to make loans and fill the credit gap when conventional lenders are unwilling or unable to provide credit,“ said Jim Radintz, deputy administrator for farm loan programs. Last year, the agency gave out about 40,000 loans worth more than $6 billion.

Lindsey Lusher Shute, the executive director and cofounder of the National Young Farmers Coalition, said FSA has been very helpful in supporting new farmers and ranchers, but ultimately the agency is limited by how much funding Congress allocates.

Shute’s group has another idea: forgive loans for full-time farmers. The proposal has been turned into a bill in the U.S. House of Representatives called the Young Farmer Success Act.

By adding full-time farmers to the Public Service Loan Forgiveness Program, which typically includes less-profitable, public service jobs like teaching and local government, young people with school debt who commit to farming for a decade would be eligible to make monthly income-based payments for 10 years, after which they would qualify for loan forgiveness.

“We also want this as a way to recruit young people into the field of agriculture, to say as a nation, ‘Thank you for being out in the field and pursuing this really noble career,’” Shute said.

Turning the bill into law might be a long shot, but Shute said she hopes it will get a serious look by Congress this session.

It’s not all gloom and doom, though, for a young person to work before starting a farm. Take organic farmer Graznak. She has paid off her student loans, and she said even though she had to work for a few years to start her farm, she did more than just save money. She learned construction, plumbing, electricity and soil science, all skills needed to launch a successful farm.