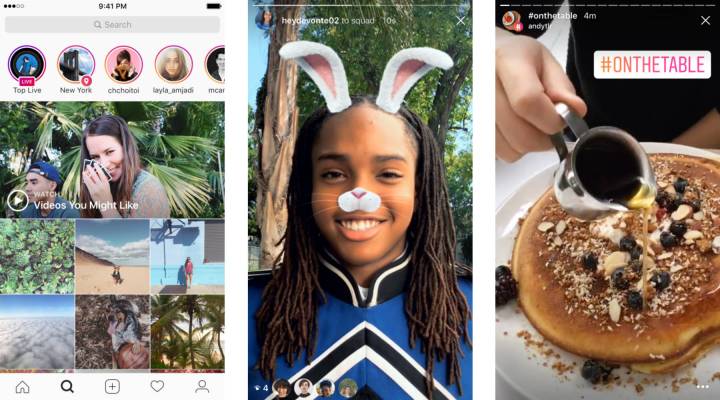 When 16-year-old Rileigh Smirl opens up Instagram, she pretty much ignores its newest and most-prominent feature. The little bubbles at the top that are supposed to show everyone’s “Stories” — a collection of photo and video slideshows decorated with stickers, drawings, filters and so on.

“Honestly I have never used the ones on Instagram and I don’t know anyone personally that has used them. They’re just kind of there, and we’re aware that they’re there,” she said. “There’s maybe like, three or four stories across the top of my home page, mostly from celebrities.”

That doesn’t mean her friends aren’t making Stories. They’re all over on Snapchat.

Smirl, who co-hosts a podcast about teenage life called “Still Buffering,” said Instagram is for scrolling through a feed of photos. Stories are for Snapchat.

“By the time Instagram Stories and messaging and stuff became available, I’d been on Snapchat for a year,” she said. “It was just kind of weird to make that transition.”

Since Instagram launched Stories last summer, it’s raised eyebrows in the tech world for replicating Snapchat’s feature of the same name. The messaging app introduced its Stories feature in 2013. Facebook, which acquired Instagram for $1 billion in 2012, folded Stories into its other apps and last week added augmented reality “face filters,” which was pretty much the only bell or whistle left to co-opt from Snapchat.  The two Stories are virtually identical — even more so, it bears mentioning, since Snapchat copied a few functions and flourishes from Instagram. But when does copying cross the line into legally dubious territory? If Snap tried to sue, would it even have a case?

A demonstration of the similarities between Snapchat and Instagram.

“Ideas, before you actually put them to work, are very vulnerable to stealing,” said University of California, Hastings law professor Ben Depoorter. “We give protection to someone who can make good on that idea, and put it into a particular application, practice, expression, art form.”

So from a copyright perspective, Snapchat owns the actual code that makes Stories work, but not the abstract idea for Stories itself. To make a copyright claim, Snapchat would have to show Instagram actually copied significant parts of its code. That seems pretty unlikely: There’s more than one way to skin a cat, and there’s more than one way to put a dog nose over your face.

Beyond copyright, Snapchat has patent applications covering things like “ephemeral message galleries.” Likewise, Facebook has a patent for “managing an ephemeral post in a social networking system” that sounds like its Snapchat competitor Slingshot. That app came with a potential patent battle of its own, before Facebook pulled it.

But asserting a patent would be an uphill battle too. Companies submit patent applications for all kinds of reasons, Depoorter said. They can help attract investors or shore up offense or defense for future litigation.

“You know, you can scare people with patents, but at the end of the day the validity of a lot of patents is questionable, especially software patents,” he said. “And even though the USPTO might grant you the patent, whether it will hold up in court is a whole different matter.”

Software patents have always been a little murky, said University of Idaho law professor Annemarie Bridy, and litigants are even more gun-shy since a 2014 Supreme court ruling threw a bunch of patents in doubt.

“If it’s a patent that just takes existing prior art and says ‘do it on a computer,’ that’s too abstract to be patent-able,” Bridy said.

That kind of takes us back to the idea of Stories. Sure, the execution is similar but does anyone really own a time-limited slideshow?

“It’s always interesting to see how Silicon Valley companies sort of assimilate innovations from other sources as a way of remaining competitive,” Bridy said. “Innovation works through imitation, innovation is cumulative. Innovation inevitably involves copying earlier technologies and then improving on them.”

Neither company responded to requests for comment, but that’s more or less what Instagram has argued in the past. Execs have given Snapchat “kudos” for pioneering Stories, but argued it’s just another format, or a facet of social media no one really owns. In that way, Stories are like hashtags, algorithmic feeds, photos filters and so on; all were popularized by one company, then co-opted by everyone else.

“Snapchat adopted face filters that existed elsewhere first, right? And slideshows existed in other places, too,” Instagram CEO Kevin Systrom told TechCrunch last summer. “So I think that’s the interesting part of the Valley. You can’t just recreate another product. But you can say ‘what’s really awesome about a format? And does it apply to our network?’”

With the news that Instagram Stories quickly surpassed Snapchat in daily users, it’s hard not to see echoes of summer 2013, when Instagram added looping videos and ushered the video app Vine toward its eventual death last year. That move helped solidify Facebook’s reputation, to some, as a copycat that absorbs any “format” and “applies” it to its billion-person network.

“A large audience doesn’t turn someone else’s idea into a big idea,” journalist John Herrman wrote in BuzzFeed at the time. ”And it certainly doesn’t make it yours.”

Since then, Facebook made an unsuccessful bid to buy Snapchat, then tried to replicate its success with several standalone apps that flopped. The company’s also cemented its place as the fifth head in Silicon Valley’s Mt. Rushmore with Amazon, Alphabet, Apple and Microsoft.

So in this case, Bridy said, a giant appears to be ripping off a competitive upstart. Not a great look.

“I wonder if what sort of offends sensibilities about what Instagram is doing now is…it doesn’t seem so much like they’re adding any value themselves,” she said.

At the end of the day, the sensibilities of tech industry watchers are pretty different than users. Some of the users we interviewed said what makes the two apps distinct doesn’t have as much to do with this one feature.

Washington D.C. high schooler John Ourand, 17, said Instagram had gotten too stressful to bother with. He said he felt obligated to follow everyone who went to his school and other schools, he stressed about follower counts and was distracted trying to get to get perfect photos. Snapchat is more of a closed system.

“I would scroll through my feed and it would just be kind of a bunch of people I don’t really know,” Ourand said. “Snapchat is a lot more kind of personalized and private, because when you add people, all you see is their name and like their Snap score snaps… You can’t really see who they follow or who follows them or who they’re snapping. All you can see is them.”

But that same gamification, like the scores Ourand mentioned, was what made Margot Thompson, 16, quit Snapchat. She didn’t like the way the app tallies “streaks” — that is, consecutive snaps two users have sent each other snaps — can sour friendships.

“They don’t even send interesting content. Like they’ll just snap random pictures of themselves, or like the floor for instance, and just send them to a bunch of people just to keep up that 300-, 400-day streak,” Thompson says. “If you break someone’s streak, especially if it’s a friend, then they might even get mad at you. I know that happens a lot with my friends which is why I stopped using it.”

Stories are just as anxiety-producing, she said. Instead of the idealized, arm’s-length view of classmates’ lives she got on Instagram, Snapchat Stories gave a real-time feed what everyone was up to, and now that opportunity for FOMO is at the top of her Instagram feed too.

“I wouldn’t want to go into my friend’s story and be like ‘Oh you’re hanging out with this person and I was not invited,’” she said. “That’s kind of the reason I got off Snapchat, I wish they could have stayed separate.”