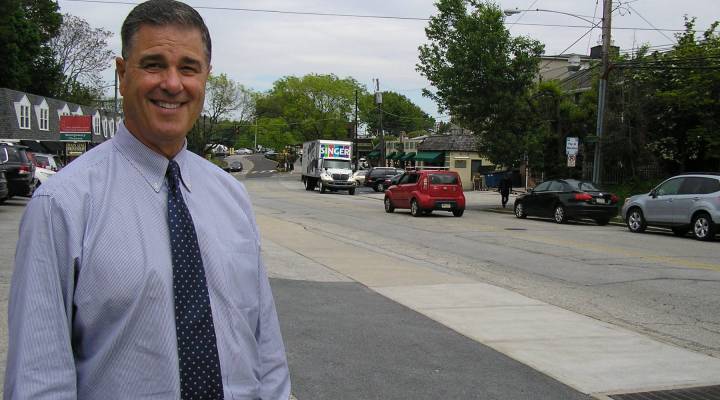 It’s hard enough to snag an interview with a big hedge fund manager.  But when you’re asking about campaign contributions? You get replies like this email.

“Thanks for your inquiry. Mr. Singer is not doing any press interviews at the moment, but we appreciate the outreach.”

I never heard back from other big hedge fund managers I contacted.

But then I finally found someone — Ted Peters.  He’s Chairman of the Bluestone Financial Institutions Group. Peters and a partner run a couple of different funds from their office in Wayne, Pennsylvania, just outside of Philadelphia. One of the funds is a hedge fund.

“About $90 million total assets under management,” he said.

Peters is not a huge player in the hedge fund world.  But he does make campaign contributions.

“I basically support people who, I think, are moderate and practical,” he said. “For president I supported John Kasich and went to his fundraisers – wrote some checks for that.”

Peters points to a picture of himself at another fundraiser, with New Jersey Governor Chris Christie.  Peters didn’t follow Christie into the Donald Trump camp, though.

“Trump is just too extreme for me,” he explained.

Peters describes himself as an Eisenhower Republican. A moderate who’s given to candidates from both parties. Now, he’ll focus his contributions farther down the ballot, giving to candidates for Congress who’ll still reach across the aisle.  Why give?

“The levels which I give at certainly are not going to have any influence,” he said. “Do you buy some kind of access? You may. You certainly may – yeah.”

Peters figures he’s given $10,000 or less a year, for the past 15 to 20 years.  He said the members of Congress he’s given to would take his calls and meet with him. Though, Peters doesn’t like to leave his office in Wayne.

A world away from Wayne, the big hedge fund managers are contributing millions to politicians.

Krumholz said hedge funds have already spent 50 percent more than they did at this point in the last presidential election.  Krumholz said their political contributions really took off in 2008. Going from a few million dollars. To almost $21 million.

“They want a relationship with power brokers in Washington who can help grease the skids on their agenda,” she said.

And it’s a big agenda. Hedge funds want to stave off more government regulation. They want bankruptcy laws that ensure they’re first in line to get their money back if one of their investments goes sour. And they want to be sure no one jacks up the tax rate they pay on their cut of the profits they make for investors.  But hedge funds aren’t just making political contributions.

“The campaign contributions buy you a seat at the table but you have to know what fork to use,” said Jack Pitney, a professor of government at Claremont McKenna College.

He said that’s where the lobbyists come in. And hedge funds are also spending more on lobbying.

“Campaign contributions get you access to members of Congress,” he explained. “But then you send in the people who really know the issues and try to get an outcome that’s most favorable to the industry that’s being regulated.”

But spending only has to be reported by registered lobbyists. And lots of people lobby but don’t have to register.  So we don’t know exactly how much hedge funds are spending on lobbyists. Ditto for campaign contributions. Because of dark money — contributions to groups that never have to say where their money comes from.

Which is just fine with secretive hedge funds.