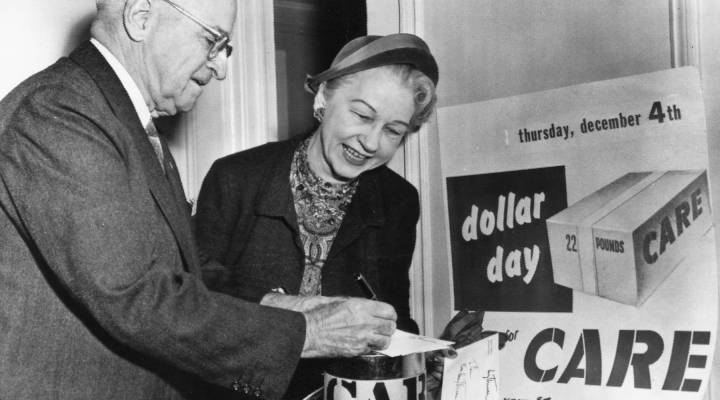 COPY
President Harry S. Truman became one of the organization's first donors when he purchased 100 CARE packages for Europe in May 1946. CARE

President Harry S. Truman became one of the organization's first donors when he purchased 100 CARE packages for Europe in May 1946. CARE
Listen Now

From college students to military service members and refugees, people have opened boxes of goodies and essentials across the world, and have been comforted. On May 11, 1946, this tradition began with CARE USA, which began sending packages of food and supplies to World War II survivors in Europe. Seventy years later, more than 100 million CARE packages have been distributed around the world.

The family of Gunter Nitsch, living in a refugee camp in West Germany, was among the lucky recipients of those deliveries. Gunter is 78 years old now. Then, he was eight years old, sharing a tiny room with his mother and brother.

“The hunger was terrible,” Nitsch said. “Everybody was hungry in Europe.”

Nitsch was born in East Prussia, and grew up on his grandfather’s farm with his mother, little brother and German shepherd, Senta. In April 1945, Nitsch and his family were captured by the Russian Army. His mother was forced to work on a kolkhoz, a Russian state-run farm.

Gunter Nitsch, age 3, on his grandfather’s farm in East Prussia with his dog Senta.

“There was no food, no medical care, no toilets,” Nitsch said. “During that terrible time, many German refugees died of starvation.”

By 1949, Nitsch and his family ended up at a refugee camp in West Germany. Suddenly, out of the blue, the family received the first of 15 CARE packages from the Peacheys, a Mennonite Christian family in Pennsylvania.

“It was incredible to us, that somebody who did not know us, in America, kept sending these packages,” Nitsch said, his voice breaking. “It was a miracle!”

Gunter Nitsch talks about how much CARE packages meant to him in this extended clip:

Some of the first CARE packages were bought by President Harry Truman, who spent $1,500 on 100 of them in May 1946. The parcels contained everything from rice and corned beef, to blankets and coffee. Celebrities such as Douglas Fairbanks, Jr. and Bob Hope helped publicize the campaign.

Bob Hope in Poland with children dressed in European costumes.

CARE USA President Michelle Nunn said the packages changed the recipients’ view of America, especially for those who were children at the time.

“They remember that little sweet of chocolate and a sense of bounty from America,” Nunn said. “A sense of inspiration about this place that they knew of as a former enemy that was providing for them.”

Over the rubble of war-battered Berlin, a father is carrying home a CARE food package that will relieve his family’s needs while they wait for better times.

Nunn said CARE’s mission has broadened since it began as what was meant to be a temporary consortium of 22 charities.

“We work in 90 different countries around the world, both in immediate crises after natural disasters or in places of conflict,” Nunn said.  “We are also doing the work of long-term development, (and) trying to lift women and girls out of poverty.”

Nunn said CARE doesn’t send packages in cardboard boxes anymore. Where it used to send flour and yeast so women could bake bread, now it provides support systems so people can create their own bakeries. CARE is working to help people in South Sudan and Asia, and also is helping refugees from the Syrian crisis.

In March of this year, Gunter Nitsch sent a letter, and a CARE package, to an 8-year-old Syrian boy named Zaher. He gets emotional when he thinks about the fate of other children who are refugees as he was so many years ago.

“The question is … does he have enough food? Will he ever get married?” Nitsch wondered. But he put his whole heart into the letter, and the package he sent, including a little airplane Nitsch made for the child.

In the letter, Nitsch writes: “I’m writing to share my story with you to let you know that no matter how bad things may seem, there are good people in the world who can make everything better.”

Nitsch says he still keeps in touch with the Peacheys, who sent all of those CARE packages, and they treat him like family. Nitsch lives in Chicago with his wife, and has written a book about his experience called “Weeds Like Us.”

Read Nitsch’s letter to Zaher below: