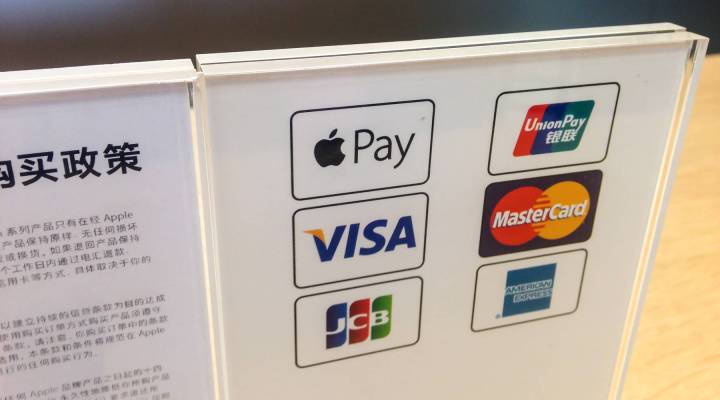 COPY
A display explaining that purchases can be made using Apple Pay, as well as other formats, at an Apple store in Shanghai. STR/AFP/Getty Images

A display explaining that purchases can be made using Apple Pay, as well as other formats, at an Apple store in Shanghai. STR/AFP/Getty Images
Listen Now

“The dominant players in the market are Alipay from Alibaba and Tenpay from Tencent,” said Mark Natkin, founder of Beijing-based Marbridge Consulting. Natkin points out these two companies make up 90 percent of the Chinese market.

China’s tech-savvy consumers have paid for hundreds of billions of dollars’ worth of goods with these apps for years. Natkin asks: Why would they switch to Apple Pay now?

“Unless you’re coming to the market with something that’s not just a little bit better, but an enormous step better in terms of ease of use, then you’re really fighting a difficult battle,” Natkin said.

But he thinks the battle is probably worth it. Mobile phone transactions accounted for hundreds of billions of dollars in China last year, compared to just tens of billions in the U.S. For Apple, seizing a single percentage point of that Chinese market share list would be valuable.