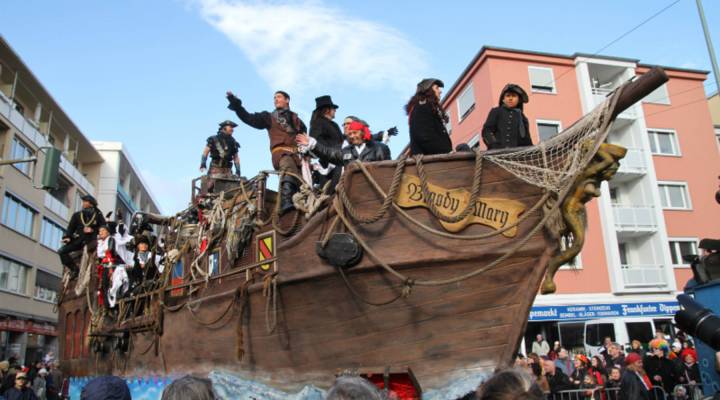 Just how do national days get on the calendar?

COPY
Talk Like a Pirate Day is a national event celebrated on YouTube every September.  Travel Aficionado/Flickr
I've Always Wondered ...

Just how do national days get on the calendar?

Talk Like a Pirate Day is a national event celebrated on YouTube every September.  Travel Aficionado/Flickr
Listen Now

Have you thought lately about how excellent you are? Well start thinkin’ about it—because at Marketplace today, we’re recognizing National Say Something Nice Day. So thanks for being you.

There are random and off-beat national days almost every day of the year.  This prompted one of our podcast listeners, Katie Rowles, to send a question all the way from Australia for our series, “I’ve Always Wondered.” How do these days get declared? Who’s in charge of the list of days?

We start with International Talk Like a Pirate Day, one of the days Katie mentioned in her question. It’s celebrated across YouTube each September 19, and it turns out a couple of guys declared the day a few years ago because, well, they’re fond of talking like pirates.

But just to narrow it down, we’re focusing on today, Monday, June 1. It’s a pretty busy for random national days: There’s Go Barefoot Day, started by an organization that gives shoes to underprivileged kids. The woman behind Pen Pal Day is a pen pal enthusiast out of Chicago. And of course, Say Something Nice Day — Mitch Carnell of Charleston, South Carolina, is behind that one.

“Because once you say something, it’s out there, you can’t call it back,” he says. Carnell submitted his idea back in 2006 to Chase’s, the yearly almanac that acts as a sort of loose gatekeeper for national days and months.

But not all national days are listed in Chase’s — the more extensive resource is the website nationaldaycalendar.com.

“There’s a couple ways it can happen,” says the site’s co-founder, Marlo Anderson. “Of course, a company or an individual can just declare it, and a lot of people do.”

Point being, really anyone can make up a national day, and there’s no accreditation process or government agency. Though Anderson says they don’t approve just any old day that comes across their desk.

“In the last year we’ve received over 10,000 requests for national days,” he says.

Out of the 10,000, he says they typically take about 20 to 25 days each year. They’ll focus on iconic items over brands — say, National Coffee Day as opposed to National Starbucks Day (which, as far as we know, hasn’t been declared). And they look for things everyone can enjoy or be a part of.

The most common request they say no to?

“You know, it’s my girlfriend of three months and she’s changed my life forever, can I have National Heather Day … that’s a very very popular thing,” Anderson says.

But most of these national days are recent inventions that have spread around on social media. As far as we can tell, only one of the June 1 celebrations goes back to before the internet: National Heimlich Maneuver Day.

“I do not know who wrote the article on it that made it come about,” says Dr. Henry Heimlich. He’s 95 and living in Cincinnati. Heimlich published an article about his life-saving maneuver on June 1, 1974.  “Immediately lives were being saved.”

At some point, a day was declared, though he’s not sure exactly how. Heimlich is pretty amused to learn that he’s now competing with National Hazelnut Cake Day.

“I guess people could choke on that too,” Heimlich says, laughing.

Well, hazelnut cake might not be for everyone, but it’s your day — go celebrate! Take off your shoes, say something nice, help out a choking neighbor, and meanwhile, start polishing up on talking like a pirate.