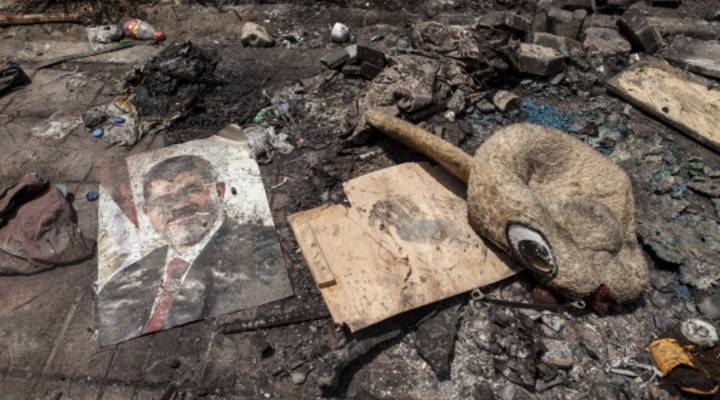 COPY
A poster of deposed Egyptian President Mohammed Morsi lies in the debris left outside the Rabaa al-Adaweya Mosque in Nasr City on August 15, 2013 in Cairo, Egypt. Ed Giles/Getty Images

When Mohamed Morsi was elected to the Egyptian presidency in June, 2012, the country was in economic shambles. The political instability and occasional outbreaks of violence that followed the toppling of his predecessor, Hosni Mubarak, had eviscerated the country’s tourism industry. Foreign currency reserves were dwindling, and foreign investors who fled during the popular uprising had yet to return.

In the months after his election, Morsi and his cabinet struggled to present a coherent economic program and lacked the broad popular support needed to implement even the few ideas they did have in their arsenal.

“They had no list of refoms; they had no clear social allies,” says Amr Adly, a postdoctoral fellow at Stanford University’s Center on Democracy, Development and the Rule of Law.

“It was a disaster,” says Steve Henke, a professor of applied economics at Johns Hopkins University, of  Morsi’s economic record. “The Morsi government never had a credible economic plan for the economy. In fact, I don’t think they knew what the word ‘plan’ meant.”

As the deficiencies of Morsi’s government became clearer, the country’s foreign reserves plunged, and unemployment, inflation and black market activity rose higher. The government took a few stabs at specific economic initiatives, including an attempt to reform subsidies that cost the Egyptian government about $17 billion each year. To many they smacked of inefficacy, if not desperation.

“There is no doubt that Egypt desperately needs to reform the subsidy structure it has,” says Moises Naim, a scholar at the Carnegie Endowment for International Peace. “But [Morsi] achieved nothing in terms of changing subsidies.”

Naim is similarly dismissive of the Morsi administration’s efforts to narrow Egypt’s deficit by issuing Sukuk, or Islamic bonds, and to negotiate a $4.8 billion loan with the International Monetary Fund.

“Egypt was not giving the IMF the priority it needed,” Naim says. “And negotations were just a sideshow.”