“At that time it was almost 90 percent foreigners,” recalls Valazza, sitting at a small table in shop in the city’s former French Concession neighborhood.

Not anymore, thanks to a rising consumer class and a string of scandals that damaged the reputation of China’s domestic food supply, nearly half of the business here at Valazza’s shop comes from local Chinese. And what are they buying?

“We see a lot of fresh milk being bought a lot, yogurt, especially, anything that children tend to eat, aby foods,” says Valazza.

One of Valazza’s sales clerks feeds the day’s catch through a money counter. Valazza’s shop, Feidan, saw a 30 percent increase in revenue last year. Imported food is an $18 billion business in China, thanks to consumers like Zhang Qi, a 33-year-old lawyer who browses the aisles with his three year-old daughter.

“With imported food, if the label says it’s organic, I trust that,” says Zhang, “Food made in China — especially children’s food — is often labeled organic, but it’s easy to fake that. So we’re sticking with imported food, organic or not.”

“You also have the USDA seal of quality control,” says Siemon, “So it really is a double premium that we’re able to offer people.”

And the premium for Organic Valley is China-sized revenue growth: After studying the market, the company estimates sales of its milk in China will go from $4 million today to $100 million in five years.

Feidan customer Zhang Qi says all this new imported food may be a catalyst for change. He says it’s sure to put more pressure on Chinese food companies to raise their standards.

Or not. China’s government is placing more and more restrictions on food from other countries. It’s a move aimed to protect Chinese companies at the expense, says Zhang, of health-conscious consumers like him. 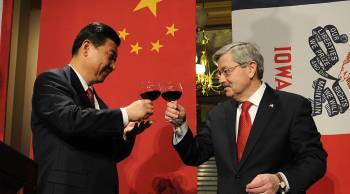