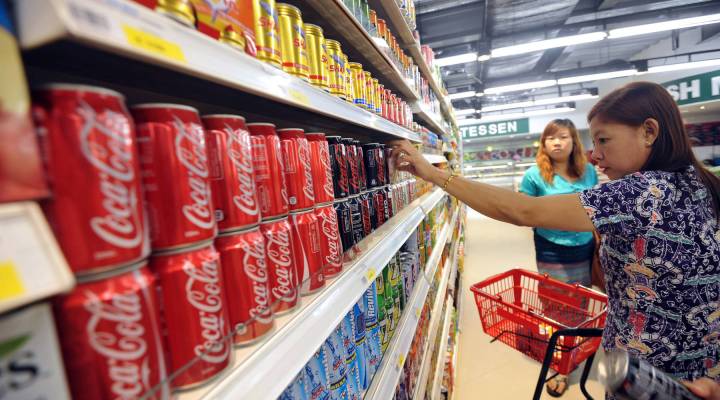 COPY
A woman takes a can of Coca-Cola from a shelf at a supermarket. Soe Than WIN/AFP/Getty Images
Mid-day Update

A woman takes a can of Coca-Cola from a shelf at a supermarket. Soe Than WIN/AFP/Getty Images
Listen Now

We’ll start with reports this morning that Dell CEO Michael Dell is in talks with two private-equity firms about a buyout. Dell became the biggest computer-maker on the planet in the early 2000s by custom-building PCs for consumers and businesses. Now, it’s struggling.

The battle continues today over raising the U.S. borrowing limit past the current $16.3 trillion ceiling. Yesterday President Obama said he sees no alternative to having Congress raise the debt limit. Meanwhile, Fitch ratings agency has warned the U.S. that if it doesn’t raise the debt ceiling soon, it could knock the U.S. down from its AAA credit rating

A number of companies announce their quarterly earnings today. Among them is home-builder Lennar. After years of dragging the economy down, the housing market is showing signs of life.

The British company HMV has been around since 1921. Unfortunately the 92-year-old British music retailer has just declared bankruptcy.

And finally, the fight against obesity has an interesting new partner — Coca-Cola. The soft drink giant has announced a new marketing campaign to fight obesity. The roll out includes a series of Super Bowl ads and Coke-sponsored fitness classes. The campaign comes on the heels of criticism from the Center For Science in the Public Interest, which linked Coke products to obesity and diabetes.