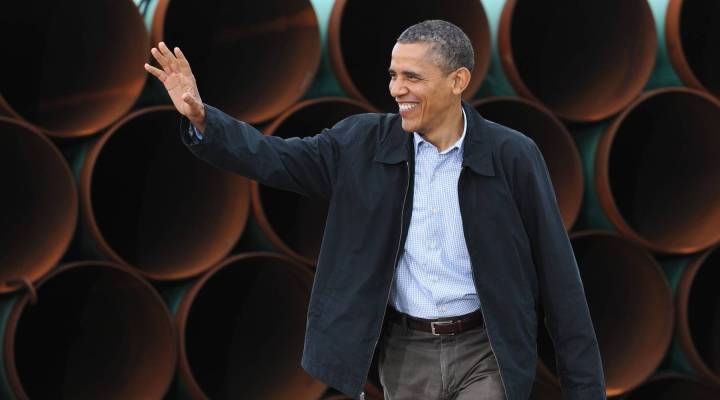 The president will be in Cushing, Okla. today as he continues a tour of four states with a focus on energy policy. Yesterday, in Nevada, the President sat down with Marketplace’s Kai Ryssdal. Kai asked him about his administration’s support for the now bankrupt Solar company Solyndra, which received a half a billion dollar federal loan guarantee.

The number of people filing for unemployment fell to a four year low last week — a sign the job market is getting stronger.

Volkswagen says it will create 800 new jobs at its Chattanooga plant to ramp up production of the Passat.

FedEx said this morning its profit more than doubled last quarter, thanks to record holiday shipping.

McDonald’s CEO Jim Skinner is stepping down. Skinner took the helm of the fast food giant in 2004. At the time, McDonald’s was struggling, Skinner turned it around and has had McDonald’s serving up record profits, overseeing some major ‘McHits’ including a revamped breakfast menu, and fancy coffee.

A conservative reporter and activist named Jason Mattera published what he thought was a hard-hitting interview with U2’s Bono on Breitbart-dot-com. It featured questions about U2’s tax practices, and was picked up by some conservative news outlets. Well it turns out it wasn’t the real Bono he was interviewing. It was a Bono impersonator. Mattera told the Washington Post quote: “I got punked.”

Ever find yourself wishing you heard a little less from certain friends? Facebook has a solution. It’s just unveiled a new tool that lets you demote a friend to an acquaintance. So you’ll hear less about their babies or dogs or what they had for lunch in your newsfeed. Your friends — I mean acquaintances — won’t be notified.