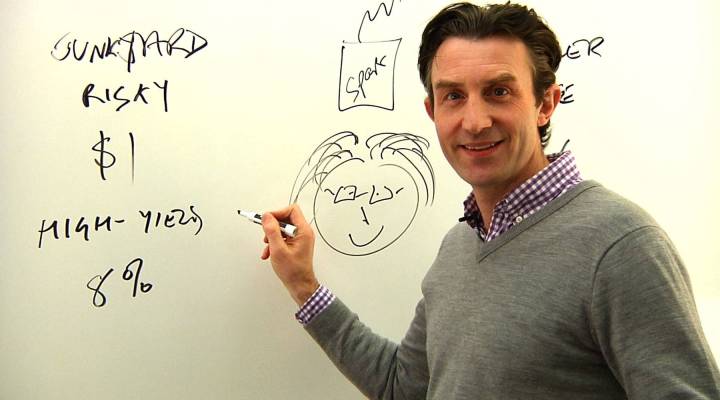 What is a junk bond?

What is a junk bond?

Junk. Not a nice word. And when it comes to bonds, not a particularly accurate word, either. Junk is something useless, right? Something you want to toss in the trash? Well, “junk” bonds are definitely not useless. In fact they’re extremely useful. Sometimes.

OK, let’s get away from bonds for a minute. Say you need a new cap for your gas tank. Let’s not talk about how you lost that thing in the first place…but you need a new one. You could get one from a dealer. Brand spanking new, manufacturers guarantee and wildly expensive. $50! Or you could go to a junkyard, dig around in the wreckage and get a gently used one for just a buck. A bargain, assuming that it does the job and doesn’t fail on you.

The same goes for bonds. You want a safe bond? Don’t expect a bargain. So-called “investment-grade bonds,” which have high credit ratings from the ratings agencies, may be plenty safe — but they don’t give up much in the way of yield. A measly few percent in interest, maybe.

If you want a better payout, or a nice fat yield, you need to buy a high-yield bond, one that pays more interest. But just like that bargain you got at the junkyard, high-yield bonds, or junk bonds if you must, are risky. The companies that issue them may be loaded down with debt, or in uncertain industries. Maybe they’ll have problem making their interest payments. Maybe they’ll even have problems paying you back!

But ask yourself: Why are those companies loaded down with debt? Sometimes it’s because they’ve overreached, or they’re poorly managed. But sometimes it’s because they’re growing. Maybe they’ve borrowed to buy a competitor, or branch into new markets. Situations like that are inherently risky, but they’re also potentially very profitable. So high-yield bonds are a bit of a gamble, just like that gas tank cap you picked from the used auto parts center. They can perform perfectly well and make you very happy, or they can default and end up worth less than the paper they’re written on. To put it another way, high-yield bonds can turn out to be junk, but assuming they’re junk from the outset would be a mistake. One man’s trash is another man’s treasure, after all!