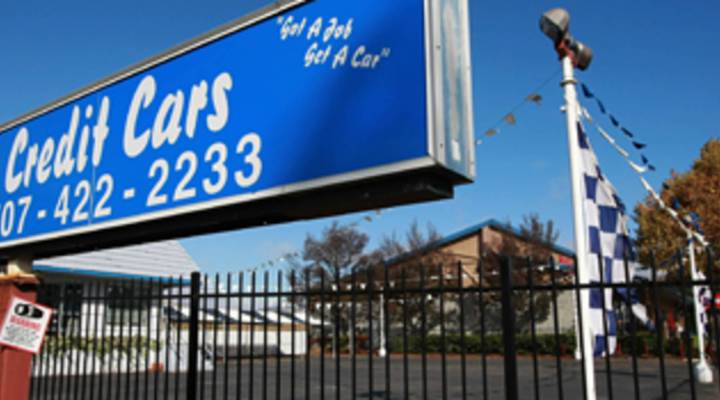 Scott Jagow: Detroit’s car makers are working feverishly to come up with plans to present to Congress. They have until tomorrow to submit their turnaround proposals. Yesterday, the head of the UAW said the union was willing to sacrifice to get a bailout for the Big Three as long as the car makers cut executive pay.

Meanwhile, auto dealerships around the country are anxiously waiting for something good to happen. Here’s Stacey Vanek-Smith.

Stacey Vanek-Smith: Twenty percent of all retail spending in the U.S. is done at auto dealerships. Or at least it was. About 700 dealerships have closed their doors so far this year.

Andy Koblenz is with the National Automobile Dealer’s Association. He says the credit crunch has been especially rough on dealers.

Andy Koblenz: The dealers carry a very expensive and very large inventories. And they also have needs for financing for the customers themselves.

The money the U.S. government has pumped into credit markets has helped, says Automotive News’ Keith Crain. But, he says, the best thing the country can do for U.S. auto dealers is bail out U.S. auto makers.

Keith Crain: Historically, whenever there’s been the smell of death about a franchise, people shied away completely and Plymouth went away and Studebaker and Oldsmobile, just on the suggestion.