Doug Krizner: Fallout from mortgage crisis is threatening to create a recession for the U.S. economy. Something it’s avoided for the last six years.

Now, former Fed chairman Alan Greenspan says the odds for a slump are increasing.
Speaking in the U.K., Mr. G. also denied that he and other regulators caused the global credit crunch. From London, Stephen Beard reports.

Stephen Beard: Greenspan is visiting Britain to plug his book, “The Age of Turbulence.” In an interview with the BBC, he said he was now less optimistic about the American economy.

He said falling house prices in the U.S. would hit consumer spending. And it was almost even bet that the U.S. slowdown would turn into something more serious.

Alan Greenspan: The danger of a recession has obviously risen. But in my judgement, and I suspect looking at the forecasts of most American economists, is that it’s still less than 50-50. It’s less optimistic than one would like.

When he was asked whether he was to blame for creating the conditions that led to the present credit crunch, Greenspan denied it. He said he didn’t cause the era of low interest rates. It stemmed from increased global saving. 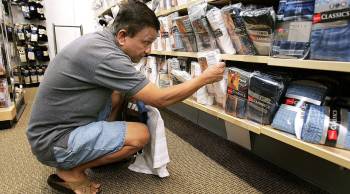