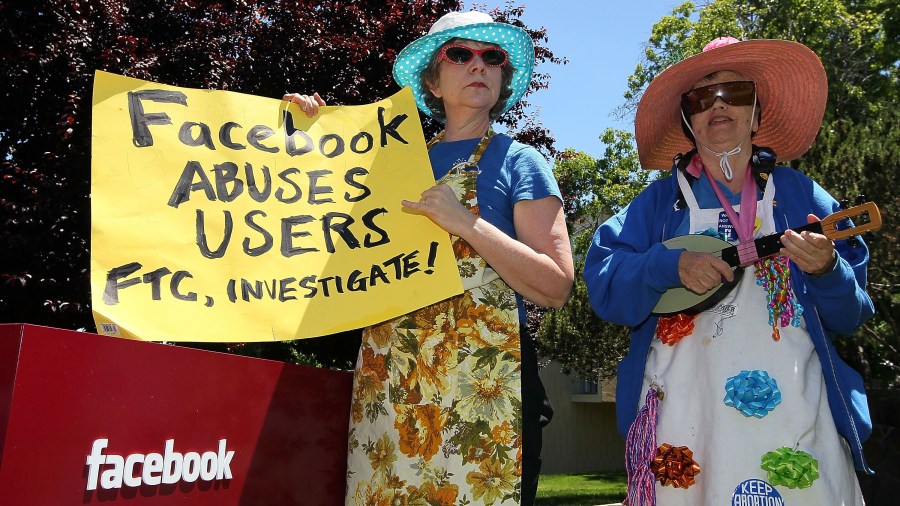 None of the fines or investigations seem to threaten the data-driven business models.
Listen Now

None of the fines or investigations seem to threaten the data-driven business models.
Subscribe on
Subscribe on

This Friday’s “Quality Assurance” segment takes a deeper look into Facebook’s antitrust investigation by the FTC and whether it’ll change anything.

This week, the Federal Trade Commission fined Facebook $5 billion, ordered changes to the company’s board and handed down some data security requirements that Mark Zuckerberg personally must monitor and confirm. The FTC is also investigating Facebook for potential antitrust violations, and the Department of Justice is probing tech companies for anti-competitive behavior.

But so far, especially with Facebook and Google, no one is talking specifically about the business model — the targeted advertising that relies so much on your personal data.

Host Molly Wood spoke with Sarah Frier, a technology reporter for Bloomberg, who spoke about settling for both privacy and targeted advertising. The following is an edited transcript of their conversation.

Sarah Frier: Well, it depends on what you consider privacy to be. Every time that you take action on Facebook by scrolling or clicking or commenting on something, Facebook is collecting information from that. So in terms of privacy — how much data you give out — that is something that target advertising cannot exist without, and something that the FTC did not tackle.

Molly Wood: So the business model doesn’t change. That said, do you feel like this week marks a real change in the U.S. approach to Big Tech? Will any of it force actual change?

Frier: It seems, so far, business as usual. Facebook announced earnings this week, beating estimates on revenue, still growing its user base. And if Facebook continues to have a robust user base and growth, then nothing the FTC is doing to change the oversight of Facebook is going to affect it. And the same goes for a lot of the other tech companies. I’m very interested to see what happens in the antitrust considerations, because I think that that has a little bit of a clear delineation than privacy in terms of what the harm for users is.

Wood: Do you think that there’s been a missed opportunity to talk about the business model? To talk about targeted advertising and even artificial intelligence? Training those machines relies on a lot of data. We’ve touched on every part of what these businesses do except maybe the financial incentive for them to keep collecting more and more data.

If we don’t address how these decisions get made down to an individual employee’s bonus and how it’s calculated, nothing really is going to change.

Frier: We have been talking so much about the consequences, but we haven’t been talking about the structure and incentives that got the companies to where they are today. Every product manager, every designer, every person who works at a company like Facebook or Google has a set of goals that they’re trying to achieve in terms of growth. We can say “oversight, oversight,” but if we don’t address how these decisions get made down to an individual employee’s bonus and how it’s calculated, nothing really is going to change.

Frier: The tech giants would benefit in some ways from regulation because they are so big, and they do have legal staffs and policy executives and this whole infrastructure of dealing with these requirements quickly, and even being able to negotiate what those requirements are by upping their lobbying expenditures. The FTC agreement that we saw with Facebook just now was a result of months of negotiation between Facebook and the FTC to get to a point where everyone was happy. That puts younger companies at a disadvantage. In this case, it was just about Facebook, but if Congress were to pass a law — if they came to an agreement about what needed to happen in privacy — it would be a much more of a burden on the younger companies that don’t have a voice in the room necessarily.

Wood: What is the consumer’s role here? One thing that could happen as a result of all this attention is consumers paying a little more attention, changing their expectations or their demands or even their behavior, right?

Frier: I think education is a big part of it. A lot of people started using these platforms out of convenience or social pressure or just to fit it into their lives, make something easier and didn’t really stop to think, “What does it mean that I am doing this and how does it affect me long term?” And I think there’s a little bit more understanding now of the fact that not just in terms of what data we give, but also what information we receive back, algorithmically organized and affected by the others in the networks we’ve joined. I think that over time, we might get a little wiser about how that affects us, because the consumer choice is what it boils down to. That’s what’s going to change how these companies operate.

The New York Times has a story about how Facebook’s co-founder, Chris Hughes, has been in meetings with the FTC, state attorneys general and the Department of Justice to argue for breaking up Facebook.

As you might imagine, it is very unusual for a co-founder of any company, let alone one as big and powerful as Facebook, to argue that it has become a monster that needs to be stopped. Hughes left Facebook about a decade ago.

In May, he wrote a very detailed op-ed for the Times and said that Facebook’s acquisitions of Instagram and WhatsApp were aimed at stifling competition, saying Mark Zuckerberg has too much power in the world. He laid out the case that the company should be split up under antitrust rules.

And we should remember that Facebook is not the only company under scrutiny here. Regulators looking at competition are considering whether Apple and Amazon have too much power because they operate the marketplaces where they also sell goods or services, or both.

The FTC has also been investigating Amazon over antitrust concerns on the topic of marketplaces that allegedly advantage their own products ahead of the competition.

The Wall Street Journal had a story earlier this week about Apple’s app store and how its investigation found that searches for common apps mostly turned up apple’s apps ahead of other developers, and that those apps are exempt from things like user reviews.

I especially noticed the part about how the podcasts app used to have at one point seven-star rating before Apple removed visible ratings from its own products.