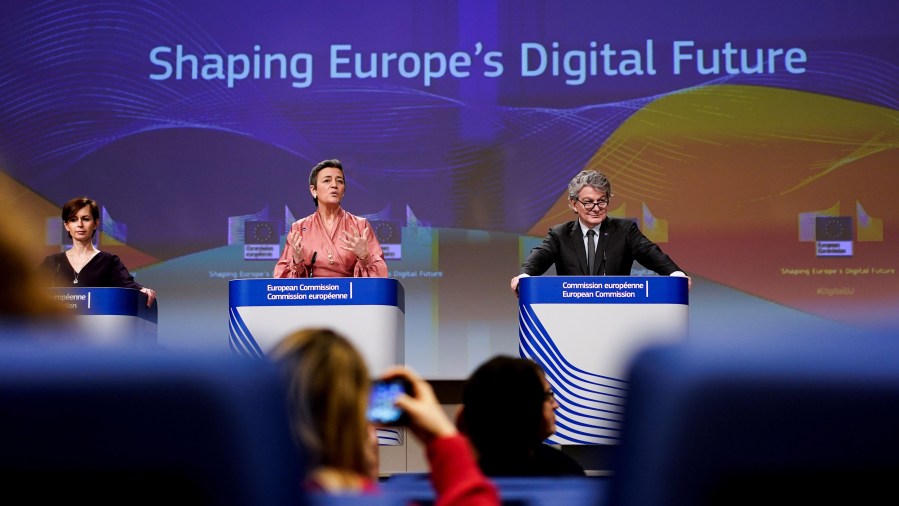 And tech leaders are in Brussels to join the conversation.
Listen Now

This week, the European Union floated some ideas for what it is calling a digital strategy — regulating tech, training citizens for the new economy, jobs, cybersecurity. It covers a lot of ground.

The parts that have U.S. tech giants paying attention involve potentially regulating artificial intelligence and facial recognition, and figuring out how European tech companies can easily access and use data about European citizens to boost their own businesses.

I spoke with Mark Scott, chief technology correspondent at Politico, and I asked him if this was the EU trying to set a digital strategy not just for Europe, but for everyone. The following is an edited transcript of our conversation.

Mark Scott: That’s what Brussels would like you to think. They are very optimistic and aggressive after [the General Data Protection Regulation went into effect] back in May 2018, because that did set the rules of the road for privacy worldwide. The problem with replicating this with data and AI is that with privacy, the Europeans had set the rules of the road since the mid-90s. When it comes to data, AI, no one currently sets the rules of the road. There’s a very big question, frankly, about whether they will be able to do that.

Molly Wood: As you watch these conversations, how much do lawmakers seem to know? When it comes to setting these rules, it seems like one big barrier, particularly around artificial intelligence and facial recognition, is that the technology is new and not always well understood.

Scott: I think less than 5% of politicians get this, but I think there’s a lot of the civil servants who do have a quasi good understanding of this. The problem is even the big tech firms are now struggling to hire AI researchers and academics, because, frankly, there aren’t any of them left because they’ve been all scooped up. If I’m being offered a six-, even seven-figure salary at a big tech firm, or I can go work for a regulator based in Paris or something, am I going to do that? The answer is no. What you’re seeing is a lot of these rules being based on lobbying and policy suggestions from the big tech firms.

Wood: That is exactly my question. We saw the big American tech firms essentially run to Brussels to be part of this conversation. What is your understanding of what’s at stake?

Scott: I think it comes down to who sets the rules of the road for the next decade. The European Union sees this as an opportunity to [say], “Fine, we’re not tech, but we’re going to win on regulation.” In the end, as tech becomes increasingly part of everyone’s lives, those who set rules create the future. Therefore, I think what is going to be playing out in the next three, five, if not 10 years, is the Europeans aggressively pushing into these new areas of digital and digital policymaking, as they see it as the only way they can compete with the Americans and, frankly, the Chinese, too.

Wood: Side note, while in Europe, Mark Zuckerberg also gave this speech acknowledging that Facebook would potentially be willing to pay more in taxes outside the U.S. You and I have talked about digital taxation before. Is that verbal concession related to these conversations about regulation, or what do you make of that?

Scott: I don’t think it hurts that if you’re willing to pay more taxes in France or Germany. You might have a better or more willingness for policymakers to listen to you than if you said, “We’re just going to pay taxes in California.” I think this is part of a strategic push by Facebook and others to be good global citizens. They’re going to end up having to pay digital tax somewhere anyway, so they might as well be part of that discussion and show that they are willing to participate. I think there’s a lot of skepticism in Brussels and European capitals about linking digital tax with the broader discussion. Zuckerberg, when he was in Brussels, also wanted to talk about who should police online content on social media. He was asking the Europeans in particular to create rules that Facebook would follow. That went down really badly, mostly because as much as you will be creating rules, European officials responded to him quite forthrightly, “You need to pull up your socks, you need to do more.” That’s something Facebook didn’t expect.

Wood: What comes next in this process? You said it’s the kickoff of what could be a long set of conversations.

Scott: I would say it’s not the beginning of the end, it’s the end of the beginning. By the end of this year, we’ll see more thought-out proposals that may look like laws or bills that will then lead to about two-ish years of horse trading and lobbying both between EU institutions and the companies involved. Then I would suggest maybe in 2023, at the earliest, we might get laws on the books. I’ve been doing this for a long time now, and just because you’re proposing something doesn’t mean it will come to pass. Therefore, my skepticism would be for all the high talk of AI rules and data pools and all these other things. The proof is in the pudding. Right now, Europe needs to really show us that it can do this, not just tell us.

I want to note one thing about the plan to make it easier for companies to share data about EU citizens across countries without having to go through Facebook or Google. It seems like that could get challenging, given the EU’s strong privacy protections. We’ll see how they navigate that little scamper across the hot coals.

Yesterday, I mentioned I’d be watching the Justice Department event about Section 230. The headline was U.S. Attorney General Bill Barr said that he hadn’t exactly made up his mind about whether to get rid of the 26-word statute that says internet platforms aren’t liable for the legal content their users post. He did say, however, that it was probably due for an overhaul.

Interestingly, Mark Zuckerberg has been singing like a friendly, harmless bird in Brussels this week about how Facebook would totally welcome new regulations on AI or facial recognition, and even how it’s willing to pay more taxes. He even suggested that maybe there’s a middle ground around Section 230 that Facebook would be happy to help shape. There’s a piece in TechDirt about how, in some ways, Section 230 is the only thing that lets competition to Facebook crop up online. Letting the company suggest ways to fix it means it would likley suggest fixes that only Facebook — and maybe Google — had the means to accomplish.

Finally, two pieces of news about Uber. One, the company laid off 80 customer support employees in Los Angeles and closed that office altogether, according to the Los Angeles Times. The ride-share company also rolled out a new customer support feature today, described in The Verge, that lets riders report nonemergency safety issues, like bad driving, texting or weed smell, or what I would use it for, near-fatal levels of cologne.