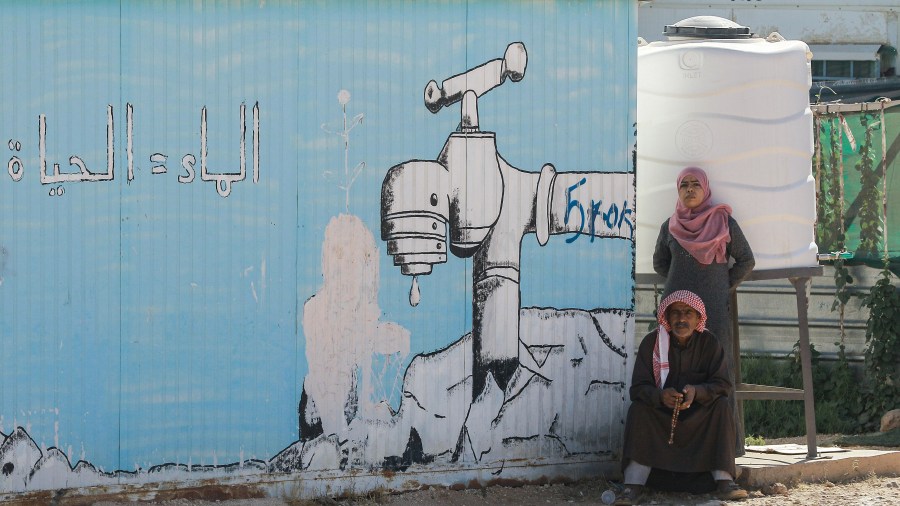 The foam allows the water to stay in place and keeps the plants upright to face the sun.
Listen Now

The foam allows the water to stay in place and keeps the plants upright to face the sun.
Subscribe on
Subscribe on

Some 80,000 people live in the Za’atari refugee camp in Jordan, the world’s largest for people fleeing the war in Syria. As the camp has evolved from a temporary tent city to a semi-permanent settlement of prefabricated houses, a surprising challenge has emerged: what to do with thousands of discarded mattresses.

Chemist Tony Ryan from the University of Sheffield in the United Kingdom knew exactly what to do — use them to grow food. I spoke with Victoria Gill, who reported this story for BBC. The following is an edited transcript of our conversation.

Victoria Gill: Remarkably, professor Ryan says that he just knew straight away [what to do with the mattresses]. He runs this sustainability institute at the University of Sheffield, essentially growing things in polyurethane foam. The idea of that was to have a system whereby you grow things hydroponically, so it’s a way of using less water in a very small amount of space to do more vertical and urban agriculture. You put things in tubs or tubes or pots with the foam in, and the water and the nutrients solution underneath, and you essentially don’t need soil. As soon as he saw this pile of polyurethane foam, he just said, “I know exactly what we can do with this. Everyone’s going to be able to have a garden.” He was just really excited.

Amy Scott: How does this actually work? Walk me through the steps.

Gill: The way that the system works, the way that you actually grow things in foam is you grow things hydroponically, so that’s basically a term that means you make the water to do the work. In Za’atari, it works by using old, reusable plastic tubs. You have your water and the nutrients at the bottom, and the foam essentially replaces the soil by holding the plant upright and in place. The foam is just of the ideal structure. It has these porous holes in it, so it allows the roots through [and] they can reach the water, and it creates a structure that supports the plant so it can stand upright and get all the sunlight it needs.

Scott: With climate change, do you see the market growing for this technology as the incidence of severe droughts becomes more common?

Gill: Exactly that. Climate change is affecting different parts of the world in different ways. The other thing is, with a growing population, and the demands on land, this type of farming — where you could take basically any space in an urban environment and turn it into a productive space using this system where you don’t need soil, you just need some kind of containment, and you need foam and you need water and nutrients — you can actually use about 20% of the water in a hydroponic system than you would use in a system where you’re growing things in the soil because the water is not draining away, it’s being kept exactly where it’s needed. This is another thing that is driving that interest in those innovations in this urban agriculture.

Scott: Did you eat any of this food?

Gill: I did. There’s a gentleman called Abu Wasim, who they call the green-hand-man because he’s just the ultimate gardener — everything he grows just turns amazingly lush. Some of his greenhouses were just full of these incredibly lush plants. On the second day, they made us lunch and there was a variety of delicious stuff. One of the things that they made was a huge salad that was out of coriander, basil, some chilies and some of the leafy plants — I can’t remember what the lettuces and salads were. All of it came from the hydroponic greenhouse, and it was delicious. This is not something that’s going to solve world hunger, this isn’t about base calories and those fundamental carbohydrates that we need, those base crops that we need. This is about nutritious foods and those vitamins and those green, leafy things that particularly in these desert environments we can’t get. In  Za’atari, … people [are] reclaiming the lost livelihood and reclaiming their well-being because a huge number of people — there’s 80,000 people that live there — used to farm back in Syria. Most of the people in Za’atari are from a place called Dhara, which is very rural. It’s a big shock to their well-being and to their way of life to come to a place where they could grow nothing. I think that’s another reason why it’s been taken up so wholeheartedly. I spoke to a gentleman who is growing an entire garden with this hydroponic system. He just said, “This makes it feel much more like a home. It reminds me of being in my home village back in Syria.” I think that well being and that reclaiming of dignity, and just fundamental humanity, is actually central to this whole mission in Za’atari.

If you’re inspired to create your own hydroponic garden, our friends at WBUR in Boston have a handy guide. No mattress required — clay pebbles, grow stones and something called “rockwool” cubes all work as a growing medium.

Also, technology is changing the housing in refugee camps, too. The Ikea Foundation’s Better Shelter packs into two flat boxes and can be assembled by four people in just four hours, assuming they can decipher those infamously frustrating illustrated instructions. It lasts six times longer than an emergency tent and has stab-proof walls and a door that locks.

Another newcomer profiled by Fast Company is called the Cortex Shelter. It uses a plastic mesh filled with cement that can be draped over a metal frame. Then, like a cast for a broken arm, just add water and it hardens.