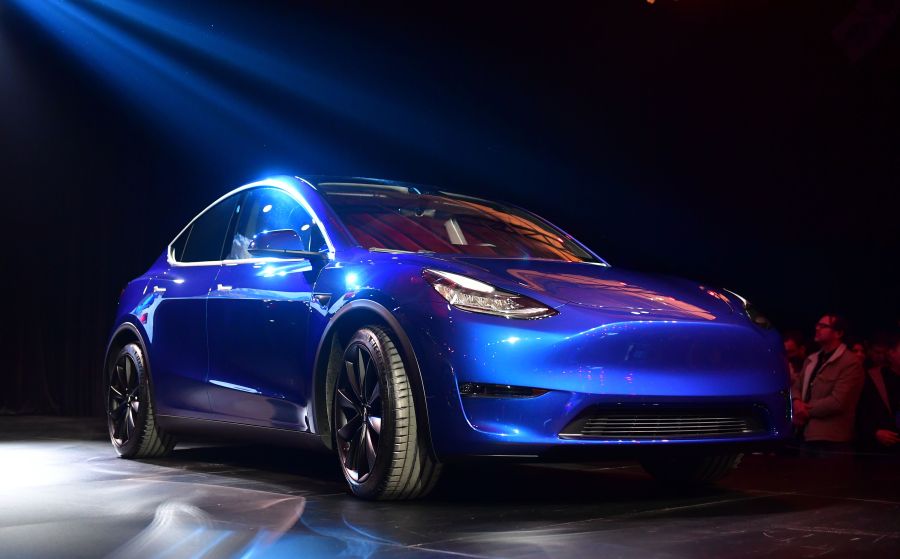 If Tesla makes a less fancy SUV … can it make it faster?

The new Model Y is — technically — a lot like the Model 3.
Listen Now

With typical Tesla fanfare and in front of his typical rabid fan base, Elon Musk unveiled Tesla’s newest vehicle, the Model Y. The Y is essentially a crossover or SUV version of the Model 3, and it could be a very smart move. Americans don’t buy mostly sedans anymore. But they did buy a lot of Tesla Model 3s. It was the top-selling luxury vehicle last year. Host Jed Kim talked with Jack Stewart, Marketplace’s transportation reporter, who was at the unveiling. Stewart says the Y isn’t a space-age leap forward. Instead, it’s really similar to the Model 3. The following is an edited transcript of their conversation.

Jed Kim: What does the Model Y look like?

Jack Stewart: It looks a lot like the the Model 3. It’s kind of like a bulked-up, toughened-up, SUVed-up version. It’s all about keeping things simple and building on a platform. The Model 3 is Tesla’s latest car, it’s cheapest sedan. When you get in that one, if it feels like a spaceship, then it’s like a really, really simple spaceship because it just has one tablet in the middle of the dash that does everything. Keeping all of that the same in the Y means that when they’re setting up new production lines, it might be a little easier. Tesla went through production hell in trying to get up to speed in making the Model 3. But hopefully they’ve learned some lessons from that, and it’s really key to just push it out there, get it off the production lines, get it into people’s hands and get the money coming in.

Kim: The Model 3 had all sorts of terrible issues with getting production up to capacity. I think there were automation issues. Do they have the ability to take on another line?

Stewart: Tesla is really running out of space. It’s Fremont factory is packed. They had to build a Model 3 production line in a tent in the parking lot just to keep up with demand at one point. This new car will be built elsewhere, likely at the Gigafactory where Tesla produces batteries in Nevada. They’ll build it in China, as well, which is another big market, and building in China makes it easier to sell in China. They are, by the sounds of it, learning some lessons about how to build a production line, which Elon Musk, interestingly, describes is way harder than building a car. He says you can design a car, and that’s relatively easy. People know how to do that, but designing the line that then builds the car is really tough. The issue for them has really been learning how to build a production system. About 20,000 people now work in the Fremont factory. Elon describes it as a giant cybernetic collective because next to the people there are robots. But there just aren’t as many robots as he originally proposed. I think we’ll see the same thing with the Y. He actually went in and famously ripped out this robot. The robot was really struggling to grab and hold and move these really fluffy, flexible pieces of insulation. Humans can do it super easily. They’re lightweight. They just pick them up and throw them down. He was like, “OK, that’s it. Let’s just rip out this really expensive robotic production line and put humans in.”

Kim: Put Joe in there.

Stewart: Yeah, Joe can do this job, and Billy the robot really struggles to manipulate this little piece of fluff.

Looking to learn more about what it’s like to work for Elon Musk? You can’t do much better than Molly Wood’s interview with Charles Duhigg. The word “hell” is a running theme. Duhigg wrote about it for Wired a few months ago.

Also, Reveal looked into safety conditions and questions of injury reporting at a Tesla factory. There are claims that Musk’s dislike of the color yellow may have made things more accident prone, because safety paint is often yellow.

Musk, for his part, argues that’s wrong. He wrote on Twitter there’s miles of yellow paint at the factory.