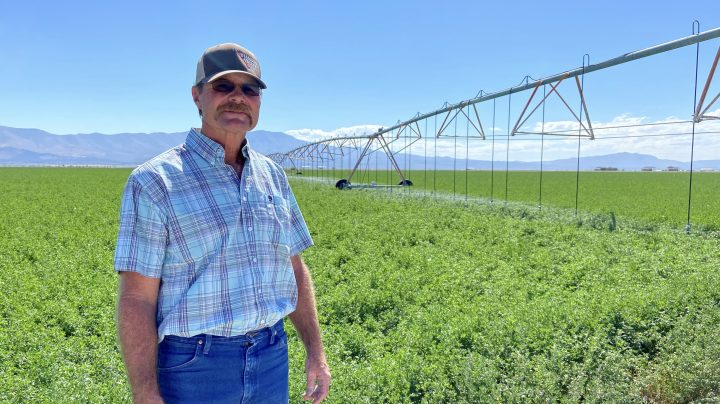 On a hot summer morning in Diamond Valley, Nevada, hay farmer Marty Plaskett stood next to a large rotating sprinkler system at ground level as it watered his green alfalfa field.

“This water here is spraying mainly in the crop canopy, so it’s spraying directly to the ground,” said Plaskett, noting how the low-elevation sprinklers reduce his water use — and waste.

For years, Plaskett used elevated sprinklers that sprayed more plants at once. Sometimes colorful rainbows would show up in the mist, a sight he used to enjoy.

“Now, it makes me sick to my stomach,” said Plaskett, shaking his head. “Because any water that’s leaving by evaporation is going up in the air. It’s the worst thing to see water drifting anymore.”

And this valley can’t afford to waste any water. For decades, water use in Diamond Valley was so high it caused groundwater levels to drop by an average of 2 feet every year. And without water?

“Your land value is zero. You have no livelihood. See you later,” Plaskett said. “So that wasn’t an option for us.”

Faced with that threat, farmers got together in an attempt to shoulder the burden. They were able to do that because in 2015, the state declared Diamond Valley a critical management area. The farmers had 10 years to put together a groundwater management plan. If they didn’t succeed, the state could turn off at least half of the farmers’ wells.

Local officials said that would cripple the county’s economy, which brings in more than $22 million a year from farming. Doing nothing simply wasn’t an option, said Jake Tibbitts, who oversees Eureka County’s natural resources department.

“We’re taking water out much quicker than it’s being replenished by Mother Nature,” Tibbitts said. “So that becomes the big issue here, is it’s something that we can’t continue on that path forever.”

Tibbitts helped develop a plan that was approved by most of the valley’s water users and later greenlighted by the state. It required all irrigators to reduce their use over time.

That’s a drastic change from how most water law functions in the West, according to Philip Womble with the Woods Institute for the Environment at Stanford University.

“The prevailing system for allocating water in the Western United States is known as ‘prior appropriation,’” Womble said. “And this is a priority-based system where older, more senior water rights get their entire water allocation before newer, more junior water users get any water.”

That’s why not everyone is in favor of Diamond Valley’s new plan — especially those farmers with senior water rights. They sued to keep the groundwater plan from moving forward. One plaintiff was cattle operation Sadler Ranch. Manager Levi Shoda said those rights shouldn’t be messed with.

Despite legal challenges, the Nevada Supreme Court upheld the contested plan in a 4-3 ruling this June. A request for a rehearing was denied late this summer.

Now, the new plan is on track to begin the next irrigation season, starting in the spring of 2023.

Back on Marty Plaskett’s hay farm, he said there’s no guarantee that this plan will work. But they had to try something to protect their futures.

“It’s just the need to have the long-term vision. It’s not about me, it’s about our kids or whoever comes next.”

Next spring, Diamond Valley farmers and ranchers as a whole have to reduce their groundwater pumping by 3%. By year 10 of the plan, they’ll have to cut back pumping by 30%. 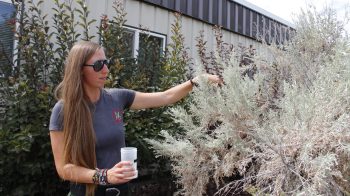