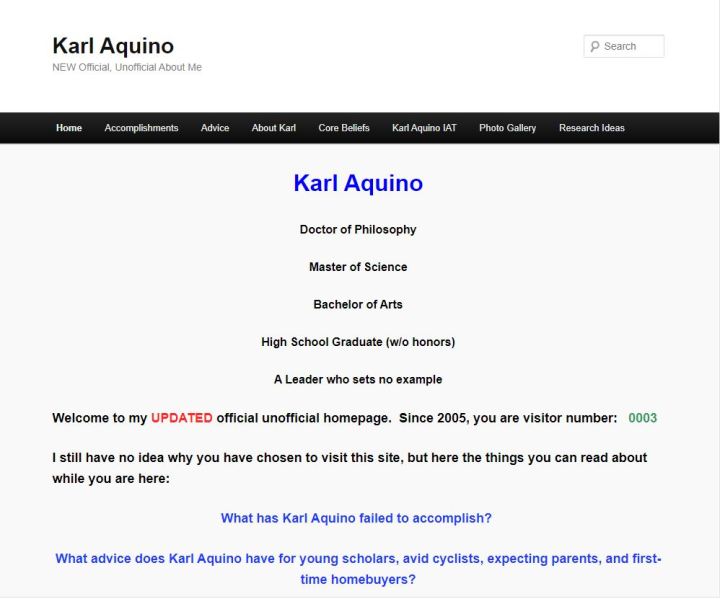 COPY
A screenshot from the homepage of Karl Aquino’s “official, unofficial” website. Aquino teaches organizations and society at the University of British Columbia. Screenshot courtesy Aquino

Karl Aquino, a professor at the University of British Columbia’s Sauder School of Business, has a highly unusual personal website. Unlike the websites of most academics, which often list recent accomplishments, areas of expertise, or awards, Aquino’s has a section dedicated to answering the question, “What has Karl Aquino failed to accomplish?” It advises young scholars to “find co-authors who are smarter, more creative, harder working, taller, and preferably better looking than you” and features a submission box for “your 5 WORST research ideas.”

In an era when “personal branding” is perceived as “more important than ever,” Aquino told “Marketplace” host Kai Ryssdal the origin story of his satirical website. The following is an edited transcript of their conversation.

Kai Ryssdal: So we should say at the outset here, just to establish your street cred, as it were, you are actually an accomplished scholar in your field. And yet, you have this website that I don’t even know — would you describe it for me, please?

Karl Aquino: Sure. I, I guess I would describe it as a kind of amusement that I created many, many years ago. But also, I suppose, a kind of satirical statement about some things that I’d observed.

Ryssdal: It’s, it’s something that has to be seen to be believed. But I’ll just, I’ll just read the first page here. “Welcome to my updated official unofficial homepage. Since 2005, you’re visitor number three. I still have no idea why you’ve chosen to visit this site, but here are the things you can read about while you are here: What has Karl Aquino failed to accomplish? What advice does Karl Aquino have for young scholars, avid cyclists, expecting parents, and first-time homebuyers?” How — give me the backstory, would you?

Aquino: Yeah, well, it’s a website that was created over 15 years ago. I wanted to kind of do a takeoff of some websites I had seen from fellow faculty, some of them which were rather lavish with self-praise. And I thought, my friend and I thought — I had a friend I was working with at the time who is also a professor— and we thought, this is kind of funny. Maybe we should make an antithesis of this kind of website. You know, a suboptimally functioning academic. [So] it’s just meant to portray someone who doesn’t appear to have anything together, but yet he’s still dispensing advice.

Aquino: Yes. Yeah, we did. I mean, I worked on it a bit over the years. I have noticed, because I teach in a business school, I do encounter different students’ websites from time to time. And yeah, the amount of self-aggrandizement that seems to go into a lot of these personal brands is actually an interesting phenomenon to study. But you know, my website appears to have stood the test of time because people picked it up again, I don’t know how, and I guess that’s why you’re talking to me now.

Ryssdal: That is true. And you know, we want to boost your brand, professor. That’s why we’re here.

Ryssdal: So look, satire aside, as a person who studies this stuff, right? I mean, you are a professor of organizations and society at UBC. What do you learn when you go and you explore the way people brand themselves here in the early 21st century?

Aquino: I think part of my curiosity about it is the different motives. So there are obviously some instrumental motives. You want to present yourself in a positive light. Perhaps you’ll get attention, you’ll get opportunities. … I mean, I think it’s also part of the ethos of our current culture to build a personal brand. [But] is building a false brand actually conducive to a life of psychological health and flourishing? I guess the jury’s still out on that.

Ryssdal: Yeah. There was a whole hue and cry in the journalism community just a number of months ago about journalists who build personal brands and whether that takes away from their work and what value it adds to the journalism that they do. So, it’s not just academia— it’s freaking everybody.

Aquino: Oh, yeah. I definitely think this is a phenomenon that, certainly, 15 years ago was not at the level that you’ve seen now. And I do think that this is maybe just part of business as usual in the age of social media.

Ryssdal: You gonna keep it up? I mean, there’s no reason to take it down, right?

Aquino: No, like I said, it seems to have had a pretty good shelf life. And you know, if it provides people with a little bit of humor and amusement. … But I think, if you read it, there’s actually a deeper message in the whole thing — it’s meant to illustrate the vanity of human pretensions. I think it does speak to, you know, how transitory our lives are and perhaps attaching extreme self-importance to ourselves and our accomplishments may not be something that will necessarily bring the best out of us. That’s kind of a deeper analysis of it than probably most people will look at, but anyway, that’s, that was part of the motivation.

Ryssdal: Look, I asked and you gave a good answer. Professor Karl Aquino is a professor of organizations and society at the University of British Columbia. He’s also, according to his website, the 56,651st most influential management thinker in the world. Professor, thanks for your time, sir. I appreciate it.

Aquino: Thanks so much, Kai. 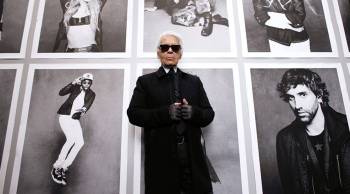