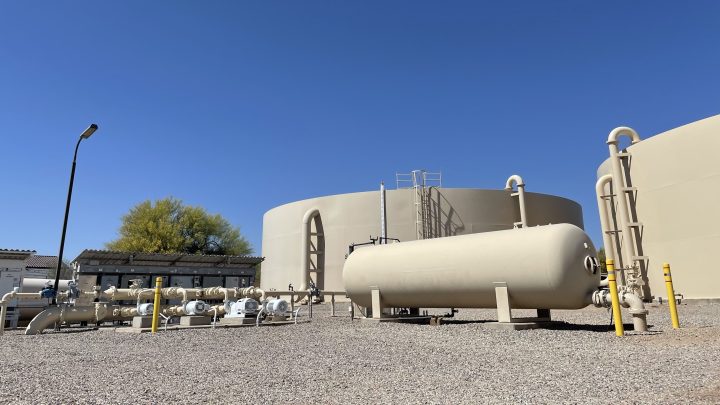 COPY
Rancho Sahuarita has grown fast, and its water utility has had to grow quickly with it. Megan Myscofski/Arizona Public Media

Rancho Sahuarita has grown fast, and its water utility has had to grow quickly with it. Megan Myscofski/Arizona Public Media
Listen Now

Rancho Sahuarita is a planned community south of Tucson. It’s in the desert, but it still has a lake that’s so big, if you stand on one side, you can’t see all the way to the other end. And it has a water park with slides, water cannons and tunnels.

“Our three pools are open all year round, but our water park opens Memorial Day through Labor Day, and you’ll have hundreds of families out here,” said Rancho Sahuarita managing partner Jeremy Sharpe.

He said there’s no question people are going to use water for recreation and to cool down. Temperatures hover around 100 degrees consistently in the summer here.

Many regions in the West have been experiencing drought conditions. Arizona is one of the fastest-growing states in the country, and at the same time is losing water to drought and cutbacks in its allocation from the Colorado River.

If the state doesn’t move more quickly to conserve water, it could lose that growth and the economic benefits that come with it.

One way the Rancho Sahuarita homeowners’ association conserves water is to limit what kinds of trees and other plants residents can put in their yards to those that need less water.

As more people move to Arizona and water becomes more scarce, state officials and developers like Sharpe are feeling the pressure to stretch that resource and keep people — and companies — coming.

Grady Gammage Jr. is a real estate lawyer and a researcher at the Kyl Center for Water Policy at Arizona State University’s Morrison Institute for Public Policy. He did research in 2011 to predict how water shortages will affect the most populated strip of Arizona, which is the stretch from the Phoenix metro area to the Tucson metro area.

“I was pretty optimistic that we probably had a robust enough water supply to get us out 50, 60, 70 years or more at the current rate of growth. I came back and did that again 10 years later, in 2021, and was less optimistic about how long we can go,” he said.

Gammage said that he now thinks the area might have another 20 or 30 years at its current pace of growth of about 100,000 people a year.

The state has made progress on things like low-flow toilets, xeriscaped yards and fewer pools, he said.

“We’re getting more efficient, but what happened is we harvested a lot of the low-hanging fruit inside the house.”

But one of the biggest water consumers is agriculture. Statewide, the industry still uses about three-quarters of Arizona’s water.

Water regulation varies a lot across the state, but more populated regions like the Phoenix and Tucson metro areas have the strictest rules and most stable supply, so Kathleen Ferris said that’s where development should happen. She helped develop the state’s groundwater regulations in the 1970s and now researches water policy at ASU’s Kyl Center.

“We should go where the water is,” Ferris said. She added that the state can’t afford to allow unbridled development in more rural desert areas.

Meanwhile, the Colorado River has fallen to historic lows. Arizona relies on the river for about a third of its water, and the federal government says the state will need to cut back to preserve the resource.