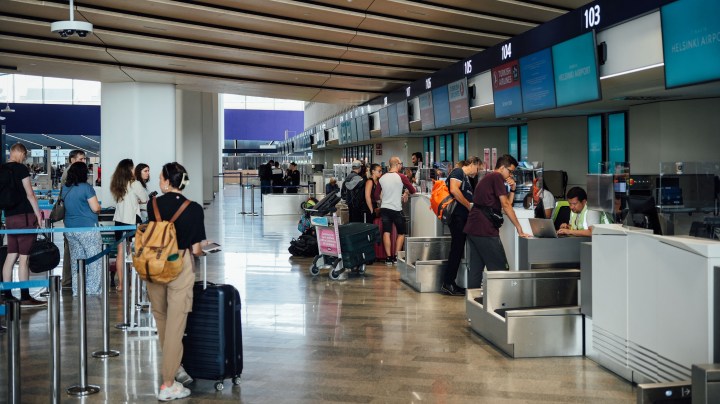 COPY
Finland is among the five European Union member countries pushing for a blanket ban on travel visas for Russian citizens. Above, travelers at Finland's Helsinki Airport in August. Alessandro Rampazzo/AFP via Getty Images

Finland is among the five European Union member countries pushing for a blanket ban on travel visas for Russian citizens. Above, travelers at Finland's Helsinki Airport in August. Alessandro Rampazzo/AFP via Getty Images
Listen Now

European Union foreign ministers recently agreed to make it more difficult for Russian citizens to travel to the bloc for a vacation as retribution for the Kremlin’s war against Ukraine.

But five EU member states say the Russians shouldn’t be allowed to visit Europe at all, and those states are still pressing for a total ban. It’s an issue that continues to divide European leaders.

German Chancellor Olaf Scholz made clear his opposition to a total travel ban at a news conference in Oslo, Norway, last month. Yes, we must hit Russian President Vladimir Putin’s henchmen hard, he said, but not ordinary Russian citizens.

“This is not the war of the Russian people,” he said. “It’s Putin’s war. We have to be very clear on that topic.”

“I think it’s not right that Russian citizens can travel, enter Europe, be tourists, see the sights, while Russia is killing people in Ukraine. It’s wrong,” she said.

The four other EU member states that share that view — Estonia, Latvia, Lithuania and Poland — also have a land border with Russia and a long troubled history of being bullied, occupied and otherwise oppressed by their dominant neighbor. While they all accept that some Russians are disgusted by the war, they regard the majority of Russians as complicit.

“Their passivity legitimizes the war and the atrocities,” Estonia’s Foreign Minister Urmas Reinsalu told Marketplace in a phone call from Tallinn, his country’s capital. “Their tax money is used to finance the bombing of schools, hospitals, kindergartens on Ukrainian soil. Citizens of the aggressor state — with some clear-cut exceptions, like people genuinely fleeing Putin’s regime — are not welcome on European soil.”

But they are still officially welcome in many EU countries. And since most member states — including the five calling for a total travel ban — belong to the Schengen area without border checks between them, Russians can arrive in Estonia, for example, whether the Estonians like it or not.

“If you’re Russian, you’re living in St. Petersburg, you want to visit France on holiday, you can get a visa from the French consulate there, take the drive to Tallinn and then get on a plane and land in France,” he said. “I can understand why Estonians feel frustrated. They’ve banned Russians but then see them appearing at their border with a visa issued by another European country that allows them passage.”

In reality, the number of Russian tourists visiting major holiday destinations in Europe slumped at the start of the pandemic and has continued to dwindle as the war has raged in Ukraine. The number of Russian applications for an EU travel visa has fallen almost 90% over the past two and a half years.

Tom Jenkins, head of the European Tourism Association and a leading expert on the European vacation industry, describes Russia as an “ex-market” right now. But it’s not one that European tour operators would happily write off.

“Before the pandemic Russian visitors were enormously important for us,” he said. “A large population with a land border with Europe. They’ve been important and affluent visitors to the Continent’s cultural capitals and also to some skiing areas, like Courchevel.”

In 2019, more Schengen-area visas were granted in Russia than any other country, and in 2018 Russians were the world’s seventh-biggest tourist spenders overall, splashing out around $35 billion on international travel.

Greece has benefited from that spending spree. Before the pandemic, more than half a million Russians a year flocked there. At the beginning of this year, as the threat of COVID-19 receded and before Moscow launched its invasion of Ukraine, the Greeks were expecting 600,000 Russians to arrive throughout this summer and to spend more than $700 million — just over 2% of Greece’s total tourism revenue.

“Unfortunately, we lost all this business due to the war,” said Lysandros Tsilides, head of the Hellenic Association of Tourist and Travel Agencies in Athens.

After the EU’s ban on flights from Russia, there was a flood of cancellations, and the expected level of bookings did not materialize. But although a total visa ban would not make much difference commercially in the short term, Tsilides is vehemently opposed to such a measure.

“Tourism promotes peace. Visitors are people. They have the right to move and speak and think freely and easily in a friendly manner,” Tsilides said. “We want to have a relationship with people from all over the world. We have to be very open.”

As an independent analyst, Redman of Oxford Analytica remains neutral on whether a total visa ban should be imposed, but he concedes that keeping Europe’s door open to ordinary Russians could help counteract Kremlin propaganda.

“At least it allows them to hear a Western perspective on what’s happening in Ukraine and to question their government’s narrative about the war,” Redman said.

Jenkins of the European Tourism Association goes further and argues that a visa ban might even bolster the Kremlin’s narrative.

“In turning around and saying, ‘Russians are the enemy,’ we’re behaving in exactly the way that Putin wants us to behave. We’re saying, ‘This is a war between the West and Russia.’ This is exactly the agenda he is putting forward.”

None of this washes with supporters of a visa ban.

Sebastian Stodolak, vice president of the Warsaw Enterprise Institute, a Polish think tank, said that a majority of Russians have at the very least acquiesced in the invasion and that it is morally repugnant to allow them to swan around “our beautiful Europe.” He doesn’t believe that exposure to free, Western societies and media would open Russian eyes or erode support for Putin.

“Russians have been traveling around the world for the last eight years since the Crimea annexation and did they come to their sense? No, obviously not,” he said.

The issue of a total visa ban will be discussed again at a major EU summit next month. Poland, Finland and the Baltic states say they’ll keep pushing for a ban, but Germany and the tourist economies and the Putin-sympathizing Hungary say they’ll keep opposing it — another crack, albeit small, in the EU’s fragile united front over the Russian invasion of Ukraine.