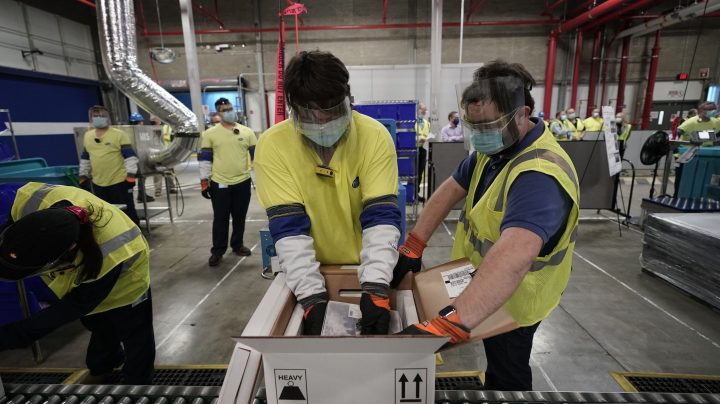 We got an updated read on labor productivity Thursday from the Labor Department. Revised figures show that productivity fell in the second quarter, by 4.1% — less than expected, but down nonetheless.

That said, it wasn’t all bad news: Productivity in manufacturing rose almost 5%. That means in the second quarter, the sector was more productive than it was before the pandemic.

Productivity is a measure of how much stuff workers make in a given period of time. So when manufacturing productivity goes up, that’s a sign we’re making more goods.

Jennifer Lee at BMO Capital Markets said consumers have been demanding them.

“Even though a lot of people have switched to services, in terms of travel and all that, there is still a hearty demand, I think, for goods. Autos, for example,” she said.

And in the second quarter, the time spent making all those goods went down.

That’s because manufacturers have been struggling to fill open positions, said Chad Moutray, chief economist with the National Association of Manufacturers.

“We’re getting more work out of our existing employees,” he said.

That raises productivity, but it’s not what manufacturers want. Those existing employees have to work longer shifts.

“We did a survey in June that said that 45% of our manufacturing members have actually had to turn away work because they don’t have enough talent,” he said.

But more recently, the sector’s been getting some relief.

Tim Fiore with the Institute for Supply Management said the supply chain’s been easing up. Input prices are settling down. And hiring is on the rise.

“We’re able to hire people again and get them on the factory floor. The quits rate seems to be diminishing a little bit,” he said.

As manufacturers put more people on the factory floor, they will have to train them first. Fiore said that can actually lower productivity in the short run.

“Although you have a gain in hours worked, you have a loss in effective hours worked,” he said. “Because even if you’re training people on the job, that means they’re taking a slower amount of time to get the job done.”

But in the long run, more people means more output. Especially since manufacturers have also been investing in their factories in the meantime, said Jennifer Lee at BMO.

“Businesses are still laying out more capital for their machines, for their equipment, for, you know, anything that lasts greater than three years,” she said.