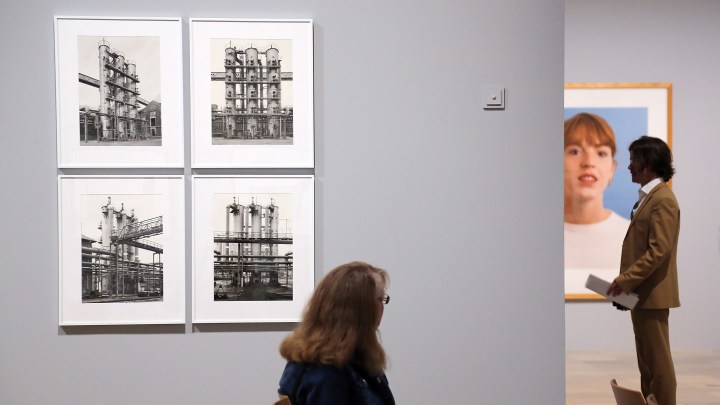 When was the last time you were awed by the beauty of a factory? Did your weekend include taking in a gorgeous vista that featured a blast furnace? You might view these icons of industrialism as eyesores rather than art, but a new exhibit at the Metropolitan Museum of Art in New York City might change your mind.

David Brancaccio spoke with art critic, Blake Gopnik, who reviewed the show. The following is an edited transcript of their conversation.

David Brancaccio: I mean, in a way this work is like driving down I-95, the Jersey Turnpike through Linden, New Jersey. Not something you spend a lot of time looking at, these industrial creations, but this wife and husband team of photographers looked at them, didn’t ignore, and looked closely.

Blake Gopnik: Yeah, there’s this fabulous show at the Metropolitan Museum in New York by Bernd and Hilla Becher who were kind of giants in, I guess, the obscure world of avant-garde photography, which is where I spend some of my time. And they just photographed all of these industrial sites, often gridding up a wall with, you know, a dozen or even more, two dozen, images of, you know, every kind of water tower you could imagine or every kind of blast furnace you could imagine. And when I was looking at these, I immediately thought of you and Marketplace, because I can’t say that there’s a lot of art out there that’s about economics, but this is clearly about economics. This is about how the west rose to be an industrial superpower, you know, how Germany recovered after the war, it was heavy industry. So all of these things are kind of tokens of that piece of history, of how we came to be as rich as we are today.

Brancaccio: I know, whenever television does stories about The Economy, capital letter T and E, you know, you have pictures of dollars being printed or something but if you want to like see the economy, that’s what this team, the Becher’s were… they were seeing it, through their lens you could see the economy.

Gopnik: Absolutely. But you know, what really struck me and I was looking at these things, and I’ve loved these for decades and decades. I used to have a bunch of reproductions of them on the wall. And I was looking at them and I realized, now wait a minute, these things are kind of gorgeous. You don’t look at the Bechers’ photographs to find out more about how a blast furnace works, or how, you know, water towers are designed, you look at it as strange aesthetic objects, and also kind of through nostalgic veil. Because I was thinking about these and I realized, wait a minute, this isn’t the industry of our days, this isn’t the economy of our days. And it’s not even the economy of the late ’60s and ’70s when the Bechers really hit their stride, or the ’90s, ’80s when they were making the photographs. It’s really an older model of how industry works. And I actually think that the Bechers we’re commenting on that older model and older mentality, a machine age mentality. I think they were commenting on it, even critiquing it, from a distance. After all, they were living in the information age, the Bechers were photographing from the information age. But they were using machine age technology, these giant view cameras, big sheets of black and white film, you know, not Kodak Instamatic loaded with color film, which is what everyone else was using to photograph the world of the information age. So for me, these Becher photographs are really about an earlier model for how the world, how the economy should come together. And I think it’s really looking back on them and saying, wait a minute, was that order – you know, everyone’s thinking about efficiency – the best way to design a water tower? Was that really a good way for the society to be thinking? To be organized? Or maybe it’s something we need to, in a sense, put into our past. And I think that’s partly what the Bechers are doing in the show at the Met. I mean, it’s incredibly gorgeous, but pretty poignant as well. I mean, this is a world that’s gone.

Brancaccio: That’s interesting. It’s like when people are on East Texas and see an old windmill on a farm that’s fallen half apart, and it’s obviously a great shot to get if you’re carrying a camera. But it’s poignant, it’s times gone by, it’s not modern agriculture, Cargill and Archer-Daniels-Midland.

Gopnik: Yeah, it’s not a service economy, that’s for sure. It’s not about you know, how many likes you can get. It’s a different world altogether. And it’s one that I think we have sort of mixed feelings about, after all, lot of people suffered in that old industrial age and it spewed more carbon into our air than we’ll ever be able to deal with. So, I think the Bechers really capture the kind of mixed feelings we all have about the industrial past and the fact that we’ve put it into the past, that we’re in a new world now. Which may be, though more colorful, is not really necessarily a smarter world than the world of industry that the Bechers we’re looking at.

Brancaccio: One more question, Warhol man. Sometimes the patterns of these industrial structures or water towers or mine heads are arranged in grids when you see the exhibit. And you can draw connections between that repetition and your friend Andy from Pittsburgh?

Gopnik: There’s no doubt in my mind at least, although I have a relatively Warhol obsessed mind, there’s no doubt in my mind that these descend directly from Warhol’s grid of 32 Campbell’s Soup Cans and his other grided-up images of everyday culture. I think that idea of just repeating something to point at it, point out it powerfully, really comes straight from Warhol. And then Bechers are Warhol’s heirs, even though, you know, we’re all so full of play and naughtiness, and there is nothing less naughty than a photograph by the Bechers, but I still think the connection is there. You could say that the Warhols are really in the information age, right? And the Bechers are looking back at the industrial age, but they’re using the same artistic tools, the idea of repetition, looking at something over and over again.