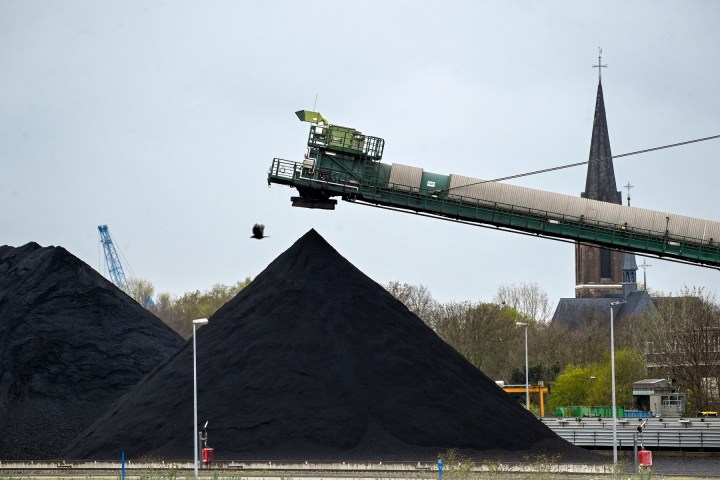 COPY
The European Union will stop importing Russian coal in August. Above, coal storage for the coal-fired power plant of the German energy supplier Steag in Duisburg, Germany. Ina Fassbender/AFP via Getty Images

European countries switched to cheaper coal for power generation following the steep increase in the price of Russian natural gas imports in 2021. However, because of Russia’s war on Ukraine, the European Union will stop importing Russian coal in August.

South Africa is one of the coal-exporting countries that has stepped into the breach, exporting more coal to Europe in the first five months of this year than during all of 2021.

The Netherlands is one of the countries that has increased imports of South African coal.

Pieter ten Bruggencate, spokesperson for the Dutch ministry of economic affairs and climate, said that the high price of natural gas and the war derailed the plan to have the country’s four coal-powered plants operate at 35% capacity starting Jan. 1, as a step toward the phase-out of coal by 2030.

“The government decided to lift the production cap immediately, and they were able to produce back in full capacity as of June 20,” he said.

However, Greenpeace Netherlands argues the government should have chosen options that do not worsen climate change.

“We think that government should have taken drastic measures to reduce our energy use instead of substituting natural gas with something even more polluting. So we are deeply concerned,” said Faiza Oulahsen, the organization’s head of climate and energy.

Botswana, South Africa’s neighbor, is also benefiting from Europe’s energy crisis. Up to earlier this year, Botswana’s Minergy Coal had only exported to neighboring countries from its Masama Mine, said Morné du Plessis, the company’s CEO. But now he said Minergy has exported coal beyond Africa.

“Lately, we have been able to transport coal to a port in Namibia,” du Plessis said. “From there, a vessel was loaded and sent to Europe.”

The Netherlands may have reverted to using more coal, but ten Bruggencate said the country is still on track to phase out coal entirely by 2030.

“We feel that there are a lot of other alternatives that can take over the bit that coal power leaves behind,” he said.