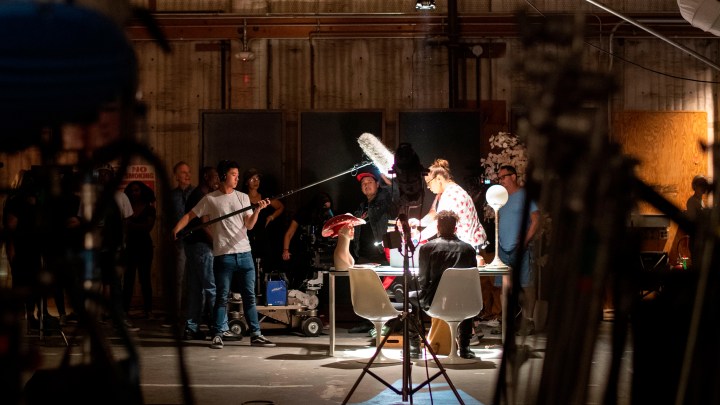 COPY
Some producers are considering whether to cut or combine scenes to offset higher expenses, says Winston Cho of The Hollywood Reporter. Valerie Macon/AFP via Getty Images

Some producers are considering whether to cut or combine scenes to offset higher expenses, says Winston Cho of The Hollywood Reporter. Valerie Macon/AFP via Getty Images
Listen Now

The 74th Emmy nominations came out Tuesday, and while people might focus on the list of nominees or analyze who the winners could be, TV companies and studio executives are struggling behind the glitz and glamour. Both show-biz segments are dealing with rising production costs, delays in the delivery of equipment and parts, and uncertain supplies of materials. This is all affecting how they do business.

To find out the details, “Marketplace” host Kai Ryssdal spoke with Winston Cho, a business and legal reporter at the Hollywood Reporter, who wrote about Hollywood’s struggles with inflation. The following is an edited transcript of their conversation.

Winston Cho: So inflation and disruptions to the supply chain have gotten to the point where productions have to start making choices on where they want to start making cuts. One physical production executive told me that one decision he has had to make is maybe a scene is seven-eighths of a page. Is that scene really necessary? Can we combine it with another scene? Now, that would save $500,000 — obviously a lot of money to these productions. So that’s where we’re seeing these cuts, typically. I should say that some of these major studios aren’t making these cuts yet.

Ryssdal: Yeah, that’s a very good point, actually. Because if you’re studio X and you’re gonna cut your production budget $500,000, but studio Y is like, “Yeah, you can have whatever you want,” guess where the A-list star is gonna go.

Cho: To the bigger studio. Yeah.

Ryssdal: Yeah. That said, though, there are some amazing things happening out there. There’s some story in this piece about a production designer or a production executive, like, not ransacking, but sort of picking through an old, abandoned building that was about to be torn down so he could get, like, the lumber and the insulation and all this.

Cho: Yeah, that was a really fun story. The foreman of the set construction shop told me that he actually heard of an office building that was slated to be demolished. Now, he got the idea going through his head that they can actually raid the office building for parts that were going to be torn down anyway. The main thing that they were going after is insulation, which manufacturers, which set construction shops are facing a massive lead time for, so he raided the office building for that insulation, and, you know, other parts of the building, like light fixtures, spare parts, things like that. And, you know, all it cost him was the labor to strip the building, basically. So you know, that was a huge win for him.

Ryssdal: Yeah, we should be clear, we aren’t talking about hard goods, right? We’re talking about lighting cables and plywood and those kinds of things that go into building the actual physical sets.

Cho: Exactly, the parts, the parts and supplies necessary to actually build the physical sets. I’m not talking about the lumber or, you know, metal or, you know, fabric or anything.

Ryssdal: It seems to me that entertainment and television shows and movies, to some regard, are especially ill-equipped to handle changes in inflation costs, right? Because, you know, a regular store retailer can pass those costs on to consumers, and the consumers, generally speaking, kind of gotta pay him or buy something else. It’s not like a studio can pass costs down to the moviegoing public or the person sitting on their couch streaming Netflix.

Cho: Yeah, I mean, I guess they can raise the price of their subscription services, but that’s something that, you know, they are obviously remiss to do. I mean, business is so big right now, business is so booming that it’s probably worth it for the set construction shop, for the studios, to be investing, expanding construction, constructing soundstage space right now. You know, productions, producers want this space, they need this space, and, you know, stage operators there, they want to be able to provide that.

Ryssdal: Important to point out here that a lot of these studios and production companies, I mean, you know, nobody’s shedding any tears for them. They’re doing just fine. Profitswise.