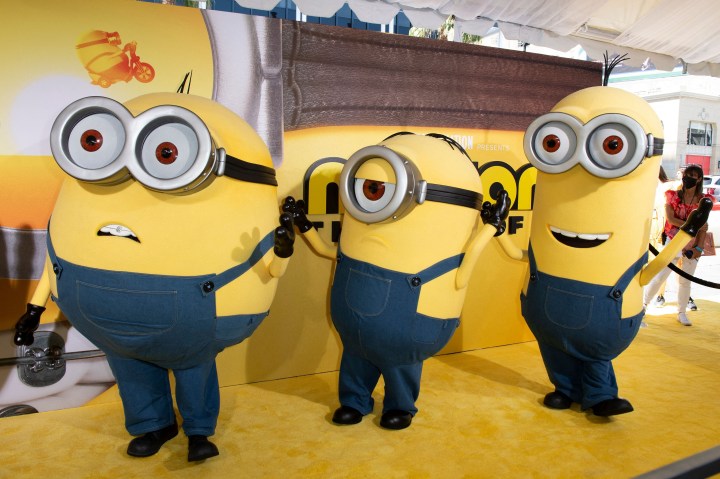 Minions Otto, Stuart and Dave attend the fan premiere of "Minions: The Rise of Gru" in Hollywood, California. Valerie Macon/AFP via Getty Images

Minions Otto, Stuart and Dave attend the fan premiere of "Minions: The Rise of Gru" in Hollywood, California. Valerie Macon/AFP via Getty Images

After a five-year wait for the return of the Minions to the big screen, a rowdy band of teenage fans dressed in suits and ties helped “Minions: The Rise of Gru” break July 4 box office records, raking in $125 million in the past four days.

Universal Pictures, the movie’s distributor, replied to the #GentleMinions trend:

“The Rise of Gru” is the fifth installment of the “Despicable Me” franchise, which has spawned toys, video games, books and theme park attractions since its launch in 2010. The story chronicles the teenage years of the first film’s protagonist, Gru, an aspiring supervillain.

Hollywood has been cashing in on nostalgia lately. The franchise’s success follows the success of other already well-established IP, like “Top Gun: Maverick,” which pulled in $570 million in the U.S. and $1.1 billion worldwide, becoming the highest-grossing movie of the year.

“Doctor Strange in the Multiverse of Madness,” based on the Marvel Comics character, has earned a whopping $953 million worldwide.

Earlier this year, a Gallup poll found that Americans were watching fewer movies on average compared to the period between 2001 and 2007, with movie visits over the past year reaching a record low of 61%.

The pandemic delayed the release of some movies, creating a bottleneck that Phil Contrino, director of media and research for the National Association of Theatre Owners, told Marketplace he hoped to see resolved this summer.

Based on the lackluster performance of other movies with familiar characters, like Pixar’s “Lightyear” (just $106 million in domestic earnings, in three weeks, on a budget of about $200 million) analysts wondered whether families with younger children were still avoiding the theater, as “Marketplace” host Amy Scott noted at the end of a recent episode.

Several factors may account for the success of the Minions movie vs. “Lightyear.” Analysts told CNBC that “Minions” relied on slapstick comedy and was more accessible to audiences, whereas “Lightyear” focused on the real-life person who served as inspiration for the Buzz Lightyear toy in the “Toy Story” films.

But there may be a dent in “Gru’s” box office earnings. Some screenings with #GentleMinions in attendance have gotten so disruptive that U.K. theaters say they’ve had to restrict access and issue refunds.