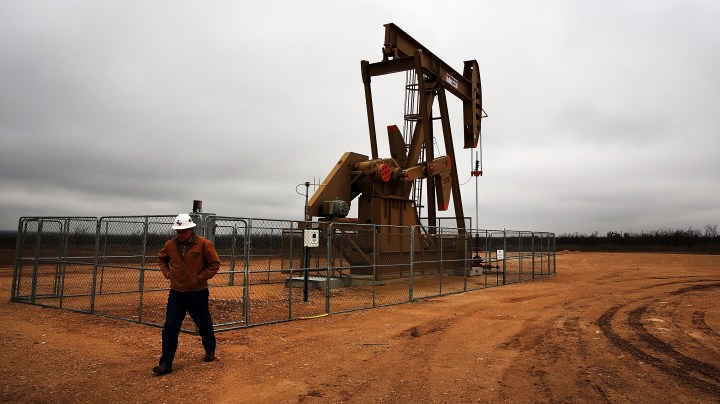 COPY
While the Biden administration has reopened federal land and offshore sites to oil and gas leases, it can take months or years to actually start pumping oil. Above, an oil well in Garden City, Texas. Spencer Platt/Getty Images

While the Biden administration has reopened federal land and offshore sites to oil and gas leases, it can take months or years to actually start pumping oil. Above, an oil well in Garden City, Texas. Spencer Platt/Getty Images
Listen Now

The Biden administration has reopened federal land and offshore sites to oil and gas lease sales after temporarily pausing them earlier this year. Some read this as a sign that new fossil fuel production in the United States is viable — at least in the short term. But when it comes to getting oil out of the ground, obtaining a lease to drill is just the tip of the iceberg.

The federal government holds quarterly lease auctions that give energy companies the right to drill for oil and gas under public land. Less than 10% of the oil and natural gas production in the U.S. currently comes from federally owned land. But that’s nothing to scoff at, said Lucian Pugliaresi, president of the Energy Policy Research Foundation.

“If you eliminate all federal leasing, there are several studies out there that within 2030, you might be down 2 million barrels a day,” he said. “That’s not the end of the world. But that’s about what the net exports for North America are now.”

That land that’s currently being auctioned through Thursday is almost 130,000 acres — mostly in Wyoming. But there’s more going on here beyond the oil and gas under the ground, said Robert Johnston at Columbia University.

“I think industry would probably argue that continuing with leasing kind of sends the positive signal, you know, the government supports leasing. So, to some degree that de-risks that type of investment.”

Energy companies — the Exxons and Shells of the world — have had a hard time securing financing for big new fossil fuel projects lately. Investors are worried that long-term, fossil fuels don’t have a future.

Now, in the short term, many companies are still interested in securing leases. But Mark Finley at Rice University in Houston said that obtaining a lease to drill is just the first part of a long process.

“Companies stockpile leases that they then evaluate for their commercial prospects, and then they come up with a capital budget and plan their drilling and the logistics of getting the crews and the drills and all the equipment,” he said.

The Federal Reserve Bank of Dallas published a survey last week noting that almost 95% of U.S. oil and gas drillers reported that supply chain issues are having negative impacts on their businesses.

And until at least that gets resolved, any land that’s been leased by energy companies is likely just going to sit there.