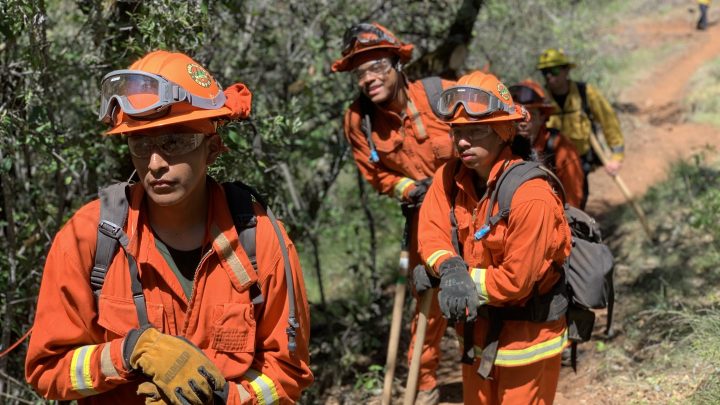 COPY
Young men from Pine Grove Youth Conservation Camp in the Sacramento-area foothills during spring training in May. Lesley McClurg/KQED

About an hour east of Sacramento, California, a fire captain unlocks and lowers the rear door of a red fire engine. Young firefighters suited in bright orange uniforms and hard hats unload in a single file. The group of 18- to 25-year-olds heads out on a 4-mile trek with full backpacks in 90-degree heat.

At the top of a steep climb, the young men pull out their shovels, rakes and chainsaws.

This summer, these incarcerated youths will help fight California’s wildfires. They will construct containment zones with hand tools and chainsaws. Yet, historically, it’s been hard for juveniles to find similar jobs once they’re released. But a recent state law is starting to change that.

Twenty-five-year-old Tramel says the hard work is good for his head. “The smell, fresh air and all that. Learn to use the ax. Use a chainsaw.”

We are only using his first name because he was convicted as a juvenile. Tramel has spent nearly a decade in the criminal justice system.

When Tramel was a teenager in Los Angeles, he says, his family fell apart.

“My dad, he wasn’t, like, really in my life — like in and out, living the street life. Then, my sister, she was missing for a while, and my mom, she was working, so there was only so much she could do and stuff like that.”

Tramel says he turned to gangs and soon landed in juvenile detention, then eventually an adult prison.

“Thousands some people in the chow hall,” Tramel says. “Fights every day. Somebody getting stabbed. You got to worry about whether you going to live or die.”

He managed to stay out of trouble, so now he’s serving a yearlong stint at Pine Grove Youth Conservation Camp. The facility is located about 90 minutes east of Sacramento. It’s down a winding road through the forest; there are no barbed wire or guard towers. Pine Grove is the only fire camp left in California for juveniles. They’re paid $2 to $4 an hour.

Though it’s hard for the youths to get jobs as firefighters once they’re released because they have criminal records, a recently passed state law is starting to open up opportunities for them. It enables some previously incarcerated firefighters to have their records expunged.

“Saw our first youth actually become a Cal Fire firefighter,” Gomes said. “First time I’ve ever seen that, so I’m extremely proud of that guy. He did a great job.”

She said it’s tedious and time-consuming to navigate the legal system. “For folks that don’t have a lot of support coming out, there’s not really a streamlined way for them to figure out how to get hired in these kinds of jobs.”

Plus, if someone has committed arson, murder, kidnapping or a sexual offense, they can’t petition their case. Since the law was passed two years ago, Michael Sicilia, deputy press secretary for the division of juvenile justice at the California Department of Corrections and Rehabilitation, estimates a handful of youths from Pine Grove have landed jobs fighting fires.

“My biggest concern is that folks coming out are still having an incredibly hard time getting these full-time positions as firefighters when they have done so much work while they were incarcerated,” Dennis said.

The work is not only hard, but it can be dangerous. During the training, Tramel was rushed to the hospital for heat stroke. Yet he said he’s ready to get back to work in the morning.

“This is a privilege,” Tramel said. “I’m going to use these skills when I get out.”

Tramel is scheduled for release next year — much earlier than he expected.