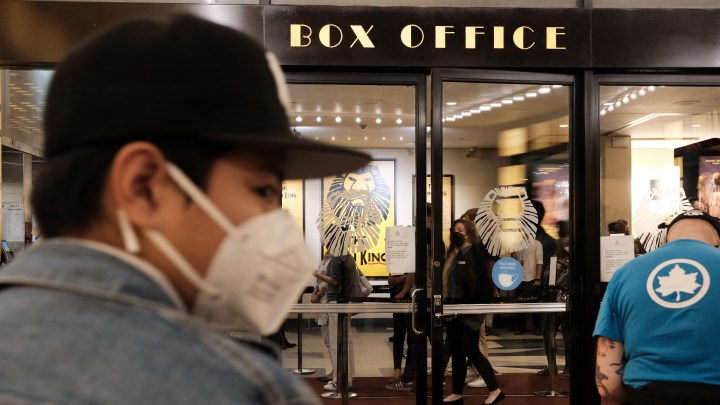 COPY
Broadway, which has been stringent on COVID-19 restrictions, is lifting its mask mandate on July 1. Spencer Platt/Getty Images
COVID-19

Broadway, which has been stringent on COVID-19 restrictions, is lifting its mask mandate on July 1. Spencer Platt/Getty Images
Listen Now

To be clear, the pandemic is not over. The federal government declared COVID-19 a public health emergency in January of 2020, and it renews that declaration about every three months.

But more major players are making decisions that convey a new level of calm. Uber is bringing back ride-sharing in major cities. And Broadway, which has exercised caution, is lifting its mask mandate on July 1.

There aren’t official data points to signal the end of the pandemic, said Lindsey Leininger, a professor of public health at Dartmouth. “It’s a feeling, really,” Leininger said.

That feeling is dictated by a mix of responses by official and unofficial entities: public health experts, local governments, schools and, increasingly, corporations. Which, Leininger said, can be good.

“I find it puzzling that we wouldn’t look to companies. They run large operations,” she said.

Companies have a lot of information about what’s happening in the world and they’re often nimble. If you think back, it was big companies that took pandemic precautions first. Sports venues canceled events before governments limited public gatherings. Airlines began requiring employee vaccinations before Washington moved to require big companies to do so.

“Some companies are large enough that they can be the trendsetters,” said Kosali Simon, a health economist at Indiana University. Trendsetters in terms of tightening restrictions — and loosening them.

“It is a big, big contest between making a profit and staying safe, staying healthy,” said Shaker Zahra, a professor of strategy at the University of Minnesota.

Companies are toggling between what shareholders want and what employees and customers want. Increasingly, Zahra said, the latter party is having a bigger impact on decisions.

“This is part of a bigger, bigger debate about the social contract we have with public companies and the changing role of social expectations of these companies,” he said.

Businesses are increasingly having to take a stance on many issues, Zahra added, asking: Why not public health?