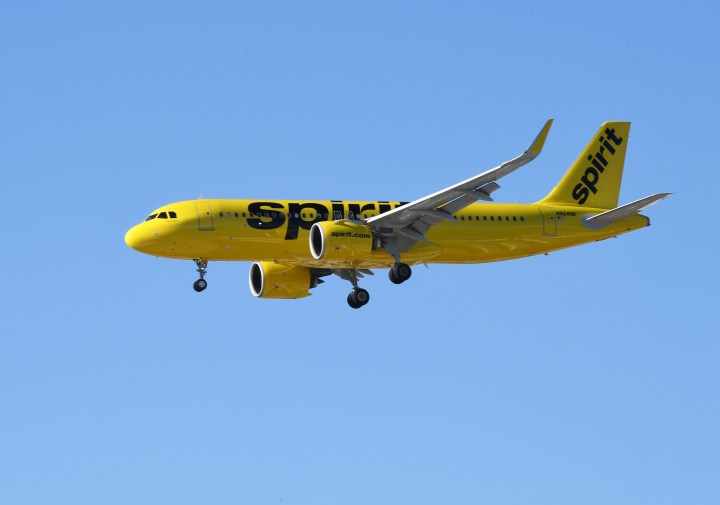 COPY
A Spirit Airlines jet comes in for a landing at McCarran International Airport on in Las Vegas, Nevada. On Friday, Spirit shareholders will vote on whether to merge with Frontier or pursue an offer from JetBlue. Photo by Ethan Miller/Getty Images

A Spirit Airlines jet comes in for a landing at McCarran International Airport on in Las Vegas, Nevada. On Friday, Spirit shareholders will vote on whether to merge with Frontier or pursue an offer from JetBlue. Photo by Ethan Miller/Getty Images
Listen Now

The battle of the discount airlines is heating up. This week, shareholders of Spirit Airlines will vote on whether to merge with fellow low-cost carrier Frontier – or pursue a rival bid from JetBlue, which has been progressively sweetening its competing offer.

JetBlue has spent the last two months wooing Spirit shareholders. On Monday, its CEO Robin Hayes set his sights on the airline’s workers, too.

“We will warmly welcome Spirit’s 10,000-plus Team Members into JetBlue if given the opportunity,” he said.

JetBlue is promising more jobs, better pay, and no furloughs.

Meanwhile, the airline is upping the fee it would pay Spirit to $350 million if regulators don’t approve a merger, said Henry Harteveldt with Atmosphere Research Group.

“It’s an insurance policy for Spirit Airlines shareholders,” he said.

JetBlue has already been under federal regulatory scrutiny for a partnership with American Airlines, according to Skift Airline Weekly editor Madhu Unnikrishnan.

“Spirit’s board has contended throughout this process that because JetBlue is already under the regulatory microscope, its merger offer has little chance of success,” he said.

A merger with Spirit – whether with JetBlue or Frontier – would create the nation’s fifth largest airline.