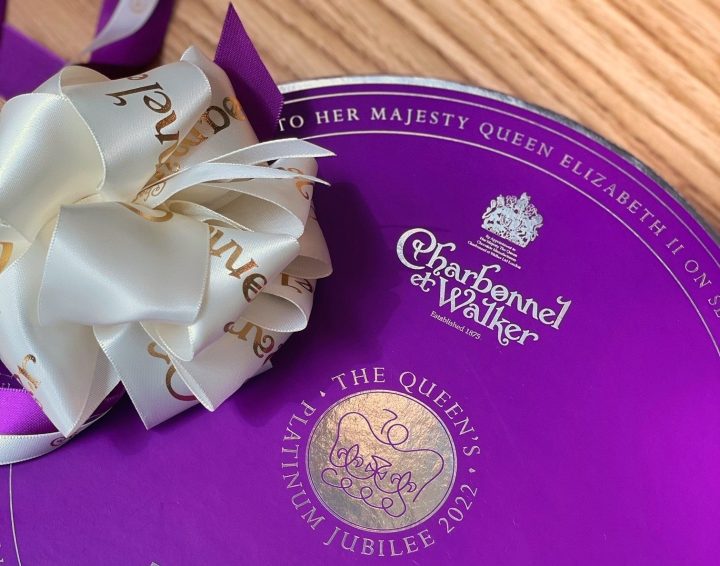 COPY
Royal warrants, like the one seen here on chocolates from Charbonnel et Walker, serve as a kind of rare royal seal of approval for certain products or companies. Victoria Craig / BBC

Royal warrants, like the one seen here on chocolates from Charbonnel et Walker, serve as a kind of rare royal seal of approval for certain products or companies. Victoria Craig / BBC
Listen Now

Queen Elizabeth II is, this weekend, celebrating 70 years on the throne, a milestone officially reached back in February when she became the U.K.’s longest-reining monarch. Excitement across Britain has been heating up in anticipation of the Platinum Jubilee, a four-day bank holiday complete with street parties, dessert-making contests, concerts, and plenty of pomp and circumstance.

For those wanting to throw a celebration fit for a queen, they might look for a literal royal stamp of approval, called a royal warrant, found on a very select number of products.

Charbonnel et Walker has one such warrant. Step into the original storefront on Old Bond Street in central London, and you’ll find row upon row of carefully made, perfectly decorated chocolates. All deliciously scented – and neatly stacked – in their gleaming glass display case.

“The chocolate crown was actually the first chocolate the Madame Charbonnel and Mrs. Walker made but you’ll also notice firm favorites: rose and violet creams made with a very special fondant recipe with rose and violet petals on each one,” spokeswoman Jo Humphries explains.

The company has been making chocolate this way since 1875. And, for the past 50 years, it’s been supplying its cocoa confections to Queen Elizabeth herself, And that has earned Charbonnel et Walker the ability to display a royal warrant – displayed as the royal coat of arms – on all of its products.

“We feel incredibly proud, actually. It’s a wonderful mark of recognition for the quality of the products that we make. That they enjoy our chocolate products,” Humphries said.

Charbonnel et Walker is one of only 800 companies with a royal warrant.

Mark Leishman, executive director and secretary of the Royal Warrant Holders Association, explains what it takes to get one.

“You apply. You have to have been trading with one of the senior households for five years out of the previous seven. If you are accepted then what you will then undergo a financial audit followed by a fairly intensive environmental audit,” Leishman said.

The whole process can take about a year, and he said there is an important distinction to be made about what the warrant actually signifies.

“These are not necessarily the best. Sometimes people will say to me: ‘Oh this is about the best of British?’ It’s actually merely the fact they happen to be suppliers to royal households. But alongside that of course is that companies will be judged on their standards and what that translates into is people saying ‘well if it’s good enough for that person, then it’s good enough for me.'”

Importantly, the products and services don’t have to be British to qualify. Champagne Lanson is one of eight French champagne houses to hold a royal warrant.

“We were granted the royal warrant on the fourth of December 1900 and have held it consistently since then,” said the company’s managing director, Robert Rand, who explained that — despite what some might think — this relationship is still a transactional one for both sides.

“Yes, they have to purchase from us. There is a committee of the good and great in the British wine industry which get together and see what’s coming up in terms of events. And we submit samples to them, and they then pick which wines they think are good for that particular venue and function,” Rand explained.

Those can be the queen’s garden parties or dinners with dignitaries from around the world. And Rand says just being associated with events like that is good for the business.

“Some of these garden parties have 5,000 people going to them so it’s great for them to be trying your champagnes there. The UK is the largest export market for Champagne Lanson and absolutely the royal warrant is key to that. It’s entrenched in our DNA,” said Rand.

A sentiment similarly shared back on Old Bond Street by Charbonnel et Walker.

The company’s adorned its bay window with Union Jack bunting, a portrait of the queen, and it’s even rolled out a special Platinum Jubilee line of chocolate boxes.

“I think everyone really appreciates the momentous occasion of 70 years of reign. Customers do love that form of recognition. Whether it’s our British customers or even those from abroad. It creates a very special gift for people to take back to their friends and family and a mark of something very British,” Humphries said.