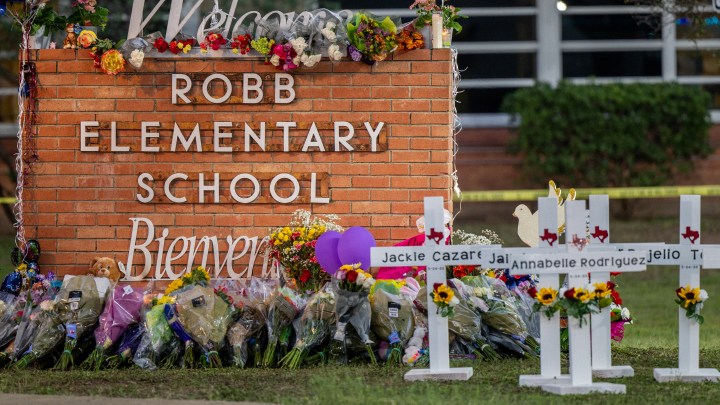 COPY
Flowers and crosses memorialize the 19 children and two teachers killed in a shooting at Robb Elementary School in Uvalde, Texas, on May 24. Brandon Bell/Getty Images

Flowers and crosses memorialize the 19 children and two teachers killed in a shooting at Robb Elementary School in Uvalde, Texas, on May 24. Brandon Bell/Getty Images
Listen Now

“Marketplace” host Kai Ryssdal spoke with John Woodrow Cox about the United State’s unique legal history regarding gun violence research funding. Cox is an enterprise reporter at The Washington Post and the author of “Children Under Fire: An American Crisis.” The following is an edited transcript of their conversation.

Kai Ryssdal: Could you give us the quick background on the Dickey Amendment, please?

John Woodrow Cox: Yes. So in the mid-1990s, a [Centers for Disease Control and Prevention] study came out that basically said that the presence of a gun in a home made people more likely to die. The [National Rifle Association] went nuts over it. They were furious and said that the government should not be pushing gun control. So they convinced a lawmaker from Arkansas to propose an amendment in a budget that said the CDC, the U.S. government researchers, were not allowed to push gun control. That’s sort of the short version of it. And it created a chilling effect that lasted for more than two decades, in which there was virtually no funding for government research of gun control. The analogy that I use is in the early stages of the pandemic, if a lawmaker — a single lawmaker — had come out and said, “You know, vaccines are just too political. We’re not going to study how to fix COVID,” it would be the same thing. This was in the ’90s when there were enormous numbers of shootings all over the country, and we simply stopped researching gun violence. It’s a thing that has set us back decades.

Ryssdal: Be more explicit for me: Why and how has that pause on research into gun violence — because, as we’ll get to in a minute, there is now some more funding for gun violence research — but we took 20ish years in this country and just didn’t study that. How did that manifest in gun policy?

Cox: Yes. So all sorts of solutions would have been surfaced through that research. And we know that because if we look at something like vehicle safety. You know, in Jay Dickey’s case, he switched sides on this issue, and he actually became a fierce advocate for research. And he regretted what was the defining moment of his political career for the rest of his life. And what convinced him were the little 3-foot barriers on the highway. He realized that a researcher had figured out that if they just put a concrete barrier between the lanes, that it would save hundreds of thousands of people’s lives. That is what we could do with guns — whether it’s smart guns or how red flag laws should work or things that we haven’t even considered. We would know those things. You know, Rand did this huge review of available research to see which policies actually work and which ones don’t, and what they found overwhelmingly was there’s not enough evidence to conclusively decide what works and what doesn’t work because there just isn’t enough research. But it was intentional. It was intentional, designed ignorance.

Ryssdal: Jay Dickey, of course, is the Arkansas lawmaker whose name became attached to that amendment. I guess the question now is, Congress, having seen perhaps the error of its ways in not studying gun violence and gun violence research, has decided to allocate more money. Where are we on gun violence research right now?

Cox: Very early. The one thing that was encouraging is this happened before the change in administration. The money was actually allocated when President [Donald] Trump was still in office, which is very encouraging because it would imply that, when a Republican takes office again, that they’ll continue to study it. But the money to this point has been symbolic. You know, I get into this in a great deal in my book, where I actually break down the amount of money we should be spending for something that kills 40,000 plus people a year. We’re in the tens of millions, like 25 million to 50 million. That tends to be what the numbers are.

Ryssdal: I’ve never said this before on “Marketplace,” but I want you to get into the weeds of how much money we should be spending, because this analysis you did was fascinating.

Cox: Hundreds of millions. We should be spending hundreds of millions of dollars. I mean, it is in the infinitesimal percentage points, because there was actually research done on, OK, the dollar spent per death caused by, you know, whatever the issue is, and it was the least studied among causes of death.

Ryssdal: Do you think it’s possible to make up for lost time? I mean, we lost 20-something years of research into this.

Cox: So, no. We can’t make up for the time we’ve lost. But you know, it’s the cliché of better late than never, right? I mean, we’re never going to get to zero. In our lifetimes, in no lifetime will America get to zero gun deaths a year or even close. But we can go from 45 [thousand] to 35 or 30, or 25. That’s worth it. Those sort of incremental steps are worth it, and that is what research could very quickly tell us. 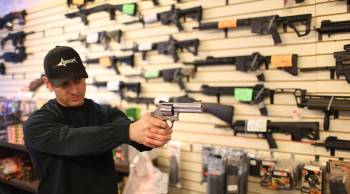