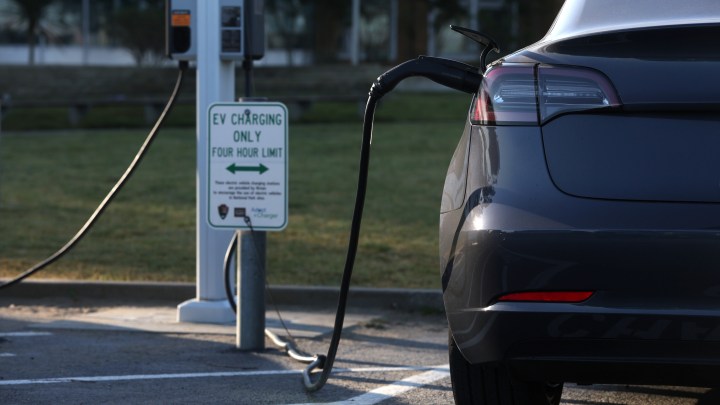 COPY
The push toward electrification is on. But is the U.S. equipped to keep up with EV production demands? Justin Sullivan/Getty Images

The push toward electrification is on. But is the U.S. equipped to keep up with EV production demands? Justin Sullivan/Getty Images
Listen Now

About 35 million Americans took to the road this weekend, according to estimates from AAA. With gas prices at an all-time high for the holiday weekend, the prospect of going electric has never been more attractive.

Road tripping in an electric car has its challenges, but it’s becoming more doable.

Michael Stern had a plan when he drove his Kia Niro EV from the DC area to visit family in New Jersey for Martin Luther King Jr. Day.

“The only place to charge up with a fast charger is at the Christiana Mall in Delaware,” he said.

So, Stern would grab lunch there and recharge for about 40 minutes. But, when he arrived, “there was someone parked in the fast charger spot that wasn’t an electric vehicle.

Making more, longer stops at slow chargers added three hours to what is usually a four-hour trip. But generally the road trip experience for EV drivers is improving, according to Sam Abuelsamid, an analyst at Guidehouse Insights.

The bipartisan infrastructure bill put $5 billion into building chargers along busy interstates. And Tesla, which has the most extensive network, is trying out systems that’ll open its chargers to other cars.