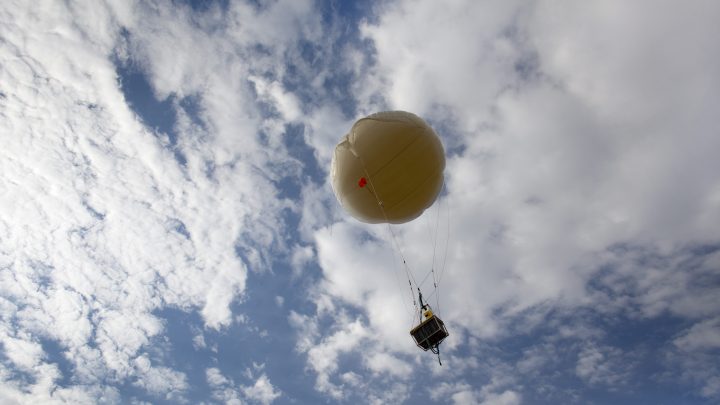 COPY
Even the U.S. weather service is cutting down on weather balloon use to preserve helium. Creative/ Getty Images

Even the U.S. weather service is cutting down on weather balloon use to preserve helium. Creative/ Getty Images
Listen Now

In the basement of the University of New Mexico’s chemistry building, Karen Smith punched in the code to get into the lab she manages. Inside, three white cylinders on blue legs that looked sort of like nine-foot-tall cousins of R2-D2 were humming away.

“You’re going to want to stay fairly close to the door,” Smith said, in case the powerful magnets inside those instruments could mess with my recording equipment.

“These magnets are donuts of wire. And because they’re sitting in liquid helium, they’ve got a lot of electricity running through them which means they can generate very strong magnetic fields,” Smith said.

Nuclear Magnetic Resonance Spectrometers, or NMRs, help researchers determine the molecular structure of everything from new medicines to building materials. Liquid helium is the only substance on earth that can keep the magnets as cold as they need to be: 450º below zero.

Another thing that’s unique about helium is that it’s extremely light. So, when it evaporates out of these instruments, it disappears into the atmosphere forever. And lately, replacing it isn’t easy.

Disruptions at helium processing plants in the U.S. and around the world have left a number of industries competing for a limited supply: healthcare, tech and manufacturing to name a few. Scientists, who use helium to keep their cryogenic instruments cold and their research balloons afloat, are at the back of the line.

Other labs have been much worse off, including the NMR facility at Oklahoma State University.

“When I first heard that we were going to get 65% of what we normally buy, I just said ‘This is not going to work,’” said Margaret Eastman, who manages that facility. “Getting a fraction of what you normally use, it’s just not possible to maintain your magnets.”

Eastman said it’s dangerous for these magnets to sit in just a shallow pool of liquid helium — or none at all.

“It’s possible that it could be damaged and you may not be able to bring it back [to generating a magnetic field] again,” Eastman said.

That would be a massive disruption to the research that relies on these instruments, and replacing them could cost hundreds of thousands or even millions of dollars.

Most of the helium in the U.S. comes from a federally run plant in Texas, according to Phil Kornbluth, president of Kornbluth Helium Consulting. That plant has been offline since January because of understaffing and safety concerns.

“That’s taken more than 10% of the world’s supply off the market,” Kornbluth said.

And the Russian government’s plan to get a new plant up and running in Siberia this spring didn’t exactly pan out.

“So, instead of getting a large new supply onto the market, we got nothing,” said Kornbluth.

Kornbluth said we’ve already seen the peak of this shortage and predicted that the Texas plant could be back online any day now. Still, it could take months for supplies to be back to normal.

“Suppliers are managing this by prioritizing certain customers because they are a medical application or a critical infrastructure thing like a nuclear power plant,” Kornbluth said. “That means if you’re viewed as less critical, your allocation could be even worse.”

For climate researchers, worse helium allocations mean fewer weather balloon launches. The National Weather Service has been cutting back on launches since March to conserve the gas.

“We can’t go back and get that data later, right? If you don’t launch the balloon then you don’t have the data,” Yuter said. “And there’s a lot of subtle things going on with climate change where we need to have a lot of data over years to tease out and diagnose how all of this is working.”

Yuter said climate scientists need a complete picture of conditions like temperature, pressure, moisture and wind speeds in the atmosphere.

“Does it have to come from a weather balloon filled with helium? No. But I need to get that profile,” she said.

This isn’t the first helium shortage Yuter has seen, but it’s the most severe. She said scientists can’t keep relying on the fragile helium market. They have to find other solutions. Karen Smith at the University of New Mexico agreed.

“I worry about our supply every day and every night, and there isn’t much I can do about it,” she said.

She’d love it if there was a powerful, stable magnet out there that could do what she needs it to do without super-cold helium.

“Everybody would go to that as soon as they could afford to buy them,” she said.

But first, somebody needs to invent it.