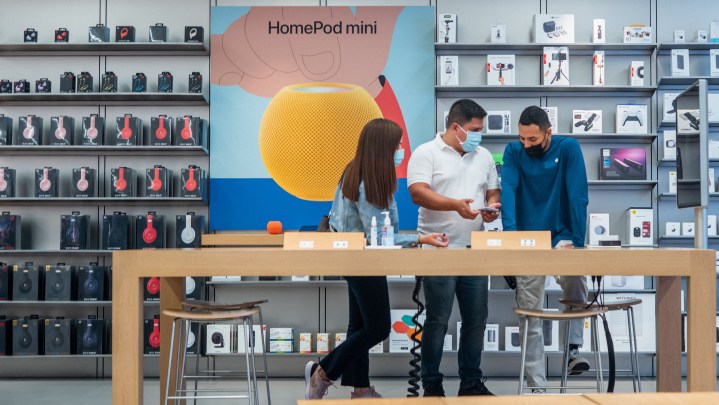 COPY
An employee serves customers at an Apple store. Apple increased its hourly starting wage to a minimum of $22. Brandon Bell/Getty Images

An employee serves customers at an Apple store. Apple increased its hourly starting wage to a minimum of $22. Brandon Bell/Getty Images
Listen Now

The new starting pay for hourly workers at Apple is $22 an hour — at least — after the company increased its compensation budget, according to The Wall Street Journal.

Target made a similar announcement back in February. This all tracks, of course, because wages are still rising in this economy as employers across the board feel pressure to pay more. How long that pressure might last, however, is an open question.

Competition for workers is driving up wages, and employees know it.

“Forty-nine percent of people believe they could make more money just by switching jobs right now,” said Allie Kelly of Employ, which makes recruiting and hiring software. “Thirty-two percent of workers feel comfortable quitting a job without having another lined up.”

That is a lot of confidence. It’s well placed because there are two job openings for every unemployed person, according to the most recent data. Wages in industries from mining to finance have been rising fast.

“But they are the fastest in anything you can’t work remotely,” said Dana Peterson, chief economist with The Conference Board.

Think health care, waiters, in-person retail. In a world of remote work, the in-person jobs are hardest to fill. A lot of people have switched out of those since the pandemic began.

“If you’re moving out of your restaurant job and then finding a tech job, you could see wages increase in both sectors. The tech job, they’re offering a higher wage to attract you, and the retail job, they’re hiking a wage to replace you,” Peterson said.

Now, of course, this is happening at a time of historic inflation. Wages have grown 5% over the past year while prices have risen 8%, according to Michael Pearce, senior U.S. economist at Capital Economics. But there are signs of relief, he added.

But there are many reasons for the labor shortage, including not enough younger workers. The Conference Board’s Peterson said we’re going to be dealing with some level of labor shortage indefinitely.