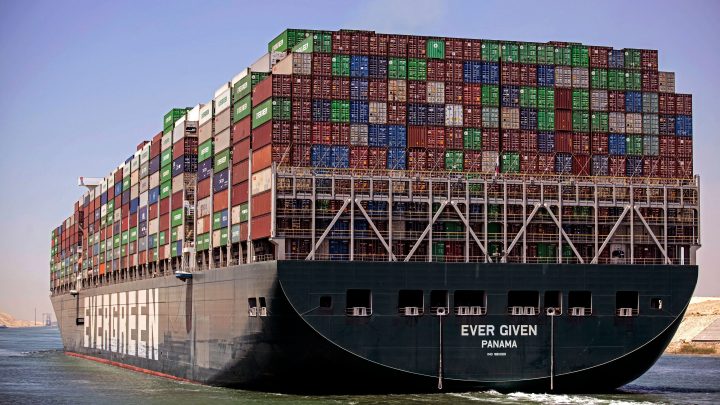 COPY
“I hate big boats, and so should you,” wrote FreightWaves editorial director Rachel Premack. The Ever Given container ship, above, sails along Egypt's Suez Canal. Mahmoud Khaled/AFP via Getty Images
Temporarily Unavailable

“I hate big boats, and so should you,” wrote FreightWaves editorial director Rachel Premack. The Ever Given container ship, above, sails along Egypt's Suez Canal. Mahmoud Khaled/AFP via Getty Images
Listen Now

Around the world, critical links in the global supply chain are still tangled. The ports of Los Angeles and Long Beach, which bring more cargo into the United States than any other port complex in the country, have a backlog of about 30 container ships waiting to unload, and widespread congestion has reduced global shipping capacity.

Rachel Premack, editorial director of FreightWaves, wrote recently about why the deployment of increasingly massive container ships, amounting to an “arms race” among carriers, deserves some of the blame for the ongoing supply chain headaches. The following is an edited transcript of her conversation with “Marketplace” host Kai Ryssdal.

Kai Ryssdal: So the very first line of the piece you wrote the other day that caught our ear and made us get you on the phone was, and this is a quote, “I hate big boats, and so should you.” Explain.

Rachel Premack: Yeah. So you really cannot talk about our messed-up supply chain situation without talking about megaships. You know, these container ships have gotten bigger and bigger throughout the decades, but port sizes have not kept up with the size of these ships. So that’s how we have a situation right now, what’s going on at the Port of Long Beach-Los Angeles, that we’ve seen this past year and a half — that’s really the only port that can handle a lot of large container ships. And as a result, there’s so much congestion there because there are really no other ports that can handle a large amount of container ships.

Ryssdal: Give me a sense of how much bigger the megaships of today are than, I don’t know, the ships of, like, 10 years ago, maybe?

Premack: Yeah. So from 2012 to today, the largest ship class, you could say, of a given year, it’s actually increased from 50% over the past 10 years and increased sixfold from 1981 to today.

Ryssdal: So in 10 years, half again as big, and sixfold in the last 40 years?

Ryssdal: Well, look, I mean, if I’m running a shipping business, I’m thinking, I want big. I want economies of scale. I want to fit a zillion of those containers on so I only have to run one crew and one ship. It seems to make sense for the shipping companies.

Premack: It does seem to make sense. But these ships are so expensive that ocean carriers literally cannot afford to pay off the loans to have these ships running. And the ships are so big that they can’t even fill these megaships on their own. As a result, you see more and more ocean carriers forming alliances with each other just to fill their own ships. It’s decreased competition because you have three alliances dominating the entire ocean carrier market. And that has a lot of implications for global trade.

Ryssdal: Yeah, pricewise for sure. They call themselves alliances. The [Joe] Biden administration calls them cartels. My guess is no matter what you call them, they are making plenty o’ money.

Premack: Yes. Some of these companies have been making more money in the past year than they did in the past 10 years just because trade has gone way up. The 10 largest ocean carrier companies all decided about 15 or 20 years ago, OK, let’s all build these giant ships. As a result, they flooded the market with ocean shipping capacity, but demand stayed the same. So you know, supply went way up, demand stayed the same and they saw rates really collapse in the past 10 years, and COVID really saved them for sure.

Ryssdal: So, and of course, what that translates into, by the way, “COVID saving them,” is that businesses are paying more to get their goods from wherever to wherever because the rates are higher, but also eventually, finally, consumers are having to pay more.

Premack: Definitely. We’ve seen unprecedentedly high shipping rates this past year and a half, and that has had a marked effect on inflation.

Ryssdal: Eventually, the supply backlog that we’re all enjoying now will ease, rates will come down, all that capacity will not be needed. But the ships will still be big and out there because we’re not going to go back to smaller ships, are we?

Premack: No. So it looks like for the next few years, many of these ocean carriers are thinking OK, we maybe we went too far with these ships. And it is a problem when you think about the fact that trade volumes will eventually decline and they will be stuck with these giant ships that they might not be able to fill.