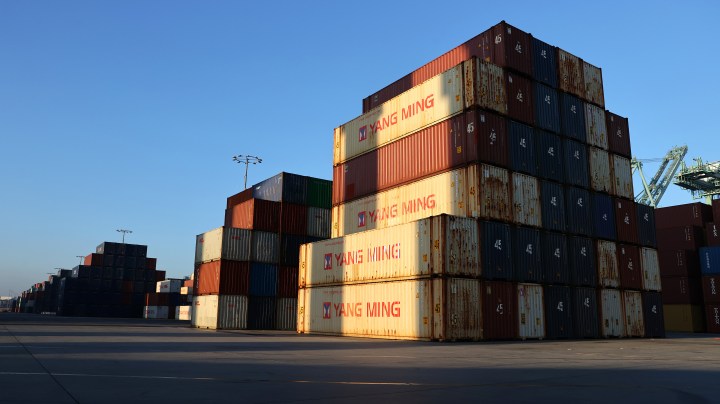 When China started locking down massive port cities like Shanghai and Shenzhen to prevent the spread of COVID-19, fears mounted that maritime supply chain disruptions would get even worse. That hasn’t happened, says Gene Seroka, the executive director of the Port of Los Angeles, America’s biggest port by container volume.

“The ships leaving Asia, and particularly in the Shanghai region, have shown to be at about 40 departures every week, which is about where we thought it would be,” said Seroka. “And now, eight weeks into the COVID lockdown, we’re not seeing any slowdown.”

On today’s Economic Pulse, Marketplace’s David Brancaccio checked in with Seroka on how the port has been handling various challenges, including China’s COVID restrictions, the ongoing shipping backlog and upcoming labor negotiations between a big longshoreman union and its employers.

David Brancaccio: Interest rates are going up. Inflation is going up. People are looking to see if this slows down consumers. But I want to ask you from your perch at the big port: Any sign that U.S. consumers are slowing down?

Gene Seroka: We don’t, at this point in time. As a leading indicator to the U.S. economy, shipments coming in for retailers, home improvement stores and other importers are as strong as ever. We at the Port of Los Angeles had our best quarter on record in the first quarter, and April was the second-best in our 115-year history. In fact, when we put out our numbers here shortly, we will show a 17% increase in cargo volume compared to the last five-year average. And imports will be up 18% over that same time period.

Brancaccio: All right, I can see, yes, there is demand. But if I flip the question, right, you would have thought, maybe, with China’s strict COVID lockdowns and production down over there? But that is not what you’re seeing over here.

Seroka: No, some had thought there would be a precipitous drop in cargo leaving central China. But what we’ve seen is consistent cargo flow. The ships leaving Asia, and particularly in the Shanghai region, have shown to be at about 40 departures every week, which is about where we thought it would be. And now eight weeks into the COVID lockdown, we’re not seeing any slowdown.

Brancaccio: How’s your parking lot, though, out to sea? I remember back in January, we were reporting on more than a hundred cargo ships out there waiting. Is the line reduced now?

Seroka: As of last night, there were 32 vessels at the 150 nautical mile marker waiting to come into Long Beach and Los Angeles, a really good series of efforts to catch up on that cargo that was waiting to come in. We’ve still got more work to do. But the interesting number to me is that we’re moving off more cargo from the port to the interior of the U.S. than we have before.

Brancaccio: And union longshore workers and the companies that employ them, where are we with that? I think they’ve started talking about a new contract?

Seroka: That’s right. They sat down at the bargaining table just last week. Discussions between the International Longshore Warehouse Union and the Pacific Maritime Association, the employer’s group. The current agreement ends on June 30, and these talks will be the beginning, or precursor, to a new longer-term agreement.