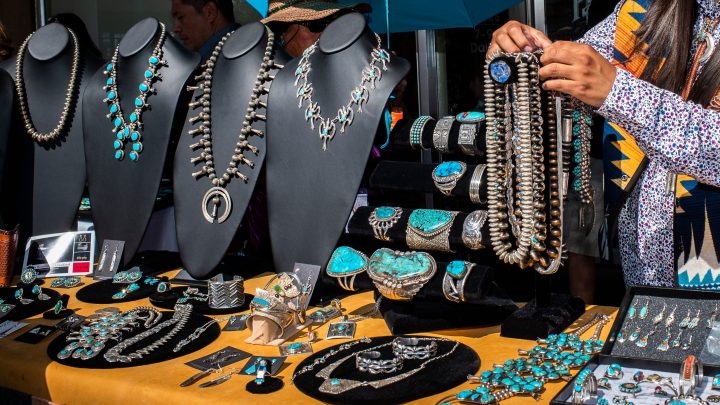 COPY
For Native American artists, making and selling art and jewelry have become more expensive, and many customers have less to spend. Luke E. Montavon/AFP via Getty Images

For Native American artists, making and selling art and jewelry have become more expensive, and many customers have less to spend. Luke E. Montavon/AFP via Getty Images
Listen Now

When the coronavirus sent people into quarantine, it also shut down the powwow season.

Powwows draw competitive Native dancers and singers from all over the continent, and there’s an economy around these events. Lots of prize money exchanges hands, and vendors of everything from Indian tacos to high-end Native art and jewelry make their living on the powwow circuit.

The Gathering of Nations Powwow, which bills itself as the largest in North America, recently returned to Albuquerque, New Mexico, for the first time since 2019. So did Pequot artist Dan Simonds, who was selling wampum jewelry made from the purple part of quahog clamshells.

Two years ago, Simonds wasn’t sure his business, which involved a lot of travel to in-person powwows and conferences, would survive the pandemic.

“First it was Denver March Powwow that got canceled, then Gathering of Nations. I was sitting on the couch that evening just like, what am I going to do? Because there was no outlet for my work,” Simonds says.

He says he started a Facebook group called Social Distance Powwow. Within days, hundreds of dancers, singers, vendors and spectators had joined.

Like a powwow, the page was focused on giving dancers and singers an outlet. But it also gave artists a place to market their work.

“If I didn’t have that page, being able to even grow my business audience through that, I wouldn’t have made it,” Simonds says.

Now, Simonds is returning to the face-to-face, on-the-road business model he relied on before the pandemic — a model that’s become a lot more expensive.

“The cost of even me getting here, the gas was hundreds of dollars. This booth space alone was $750,” Simonds says.

Those costs add up when you’re traveling to a different powwow every weekend. And when the job can take you from Colorado to Connecticut to Manitoba, Canada, all in one season.

Many vendors here at Gathering of Nations, including beadwork artist Loretta Benally, are paying a lot more for materials than they used to.

“You have your beads, you have your thread, your leather,” Benally says. “All of those prices are going up.”

At her booth, Benally is selling ribbon skirts and some smaller pieces of beadwork, like earrings and medallions. She says adjusting her prices to account for those costs has been tricky.

Some non-Native tourists at these events might see a $60 price tag on a piece of hand-beaded jewelry and get sticker shock.

“Some of them that don’t know a whole lot about it, they’ll come and they’ll say, ‘Wow, that’s really pricey!’” Benally says. “And we just tell them, ‘Sit down and take the time to make something like this yourself.’”

Then, she says, they might understand how much time and skill goes into her craft.

When she’s at her beading table in North Platte, Nebraska, Benally beads custom-ordered regalia sets — the kind worn by dancers at powwows, which can take weeks or months to finish. But the market for those pricier pieces is fairly limited. Even with her costs rising, Benally can only charge as much as dancers are able to pay.

“If someone’s really into [a beadwork design] and down on their luck, I’ll give them a break. Because it’s kind of hard times right now,” Benally says.

For Eastern Shoshone artist Joanne Brings Thunder, it’s clear that the powwow community is on a tighter budget.

“At this show, the disposable income is just not there. My sales are down compared to when I’ve come here in the past,” Brings Thunder says.

She makes Shoshone-style narrative art on ledger paper, her take on the historic Plains drawing style. She also makes jewelry and has her own line of textiles, luxuries she says some travelers at this year’s Gathering of Nations can’t afford.

“I think the gas prices and the food costs, just the cost of living, is definitely hitting people’s pocketbooks,” she said.

Looking at a potentially slow sales season at in-person events, Brings Thunder is glad she focused on her online presence during the pandemic.

“On Facebook and Instagram, I can post something and it’s usually sold pretty quickly. My customers watch for that. If I’m not at a powwow they’re at, they’ll hit me up,” she said. “I’m blessed to have built that customer base.”

She fears that this model of traveling to powwows like Gathering of Nations is no longer accessible to young Native artists who are just launching their businesses. Her advice for those artists? Market your work on social media before you hit the powwow trail.