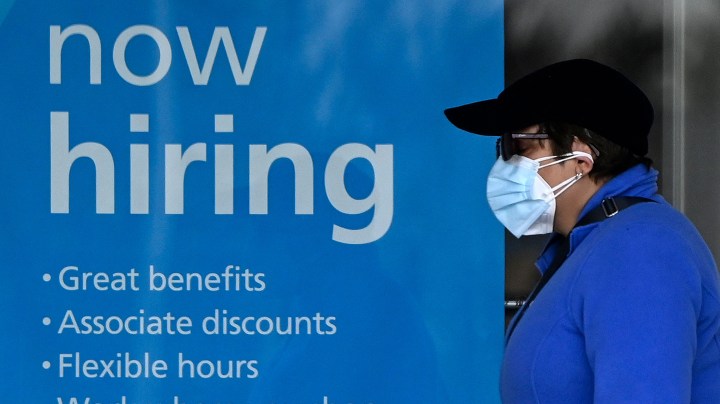 COPY
New data show that hourly wages are up by 5.6 percent on average as of March, but employees are demanding more from employers in a strong labor market. Olivier Douliery/AFP via Getty Images

New data show that hourly wages are up by 5.6 percent on average as of March, but employees are demanding more from employers in a strong labor market. Olivier Douliery/AFP via Getty Images
Listen Now

Job creation has slowed a bit from the torrid pace it set earlier this year.

What hasn’t been slowing, however, is wage growth. Average hourly earnings were up 5.6 percent in March, compared to a year ago.

Even with wages rising as fast as they are, the average American’s paycheck isn’t keeping up with inflation. But many workers right now are getting raises that are well above average.

“I try to be direct—if I want more money, I’ll ask for more money,” said Bryan Redemske, an insurance adjuster in Omaha, Nebraska.

Redemske said when a rival firm made him a lucrative offer to jump ship, “I presented that to my current employer, I said ‘look, they’re giving me a lot of money to do this job.’ They said, ‘We’re happy for you, but what did they offer you?’ And they ultimately matched the number that I was being offered.”

He ended up with a 13-and-a-half percent raise, to do exactly the same job.

“I don’t know how they’re absorbing the cost. I don’t think anybody’s cutting corners anywhere, to make sure that Bryan stays around, gets to go out to eat once more per month or something like that,” he said.

It’s a challenge for employers to keep up in a labor market where there are about 2 open positions for every 1 person looking for work, says Frank Fiorille at small-business payroll processor Paychex.

“This growth in wages—it’s unprecedented going back ten, fifteen years. It’s not slowing down either,” said Fiorille.

He says that keeping current workers and recruiting new ones starts with higher pay, but employees want more.

It’s common wisdom in career advising that the best path to a substantial pay hike is to quit and get a new job. That has been true in the Great Resignation, but it creates another problem, says Lauren Mason at HR consulting firm Mercer: new hires with little experience getting paid more than workers who’ve been around for longer.

Mason says employers are under pressure “to make sure that they are providing competitive pay to those who stick around, and rewarding those for their loyalty.”

All of this workplace churn affects employees as well. Bryan Redemske says that some pressure came with his double-digit raise.

“I went through this whole drama: ‘Hey I’m gonna leave.’ ‘No you’re not. We’re going to give you more money to stay.’ And then I say ‘oh I’ll take the money, that sounds awesome.’ Basically I kinda’ feel like I gotta’ earn my money now,” said Redemske, who feels that means he’ll end up contributing more to the bottom line.