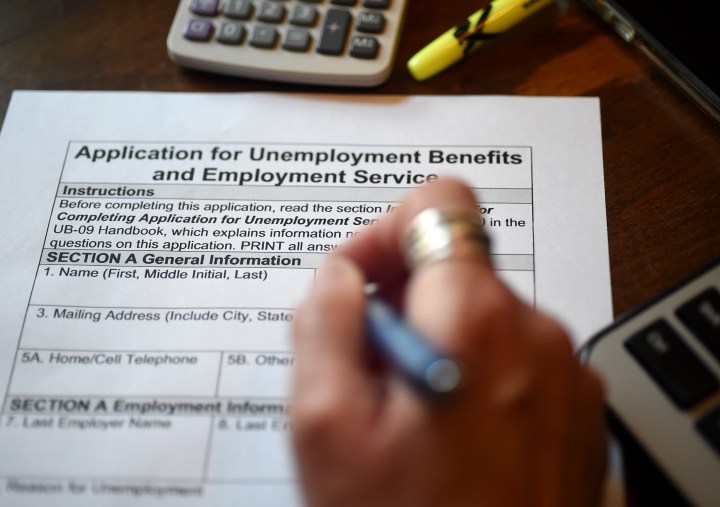 David Brancaccio, Jarrett Dang, and Erika Soderstrom May 4, 2022
Heard on:

COPY
"When we look at some of the disaggregated dynamics of the labor market, in terms of race, ethnicity, gender, we recognize that not everybody is doing so well," says Dr. Alex Camardelle of the Joint Center for Political and Economic Studies. Olivier Douliery/AFP via Getty Images
Economic Pulse

David Brancaccio, Jarrett Dang, and Erika Soderstrom May 4, 2022
Heard on:

"When we look at some of the disaggregated dynamics of the labor market, in terms of race, ethnicity, gender, we recognize that not everybody is doing so well," says Dr. Alex Camardelle of the Joint Center for Political and Economic Studies. Olivier Douliery/AFP via Getty Images
Listen Now

The monthly jobs report from the federal government is used as one of the key benchmarks to measure the health of the economy. The latest unemployment rate reveals a strong labor market and near record-low unemployment.

However, that figure does not tell the whole story, according to Alex Camardelle, director of Workforce Policy at the Joint Center for Political and Economic Studies. He points to inequities in job quality and unemployment rates along racial, ethnic and gender lines that often aren’t reflected in most headlines about jobs.

“When we look at some of the disaggregated dynamics of the labor market, in terms of race, ethnicity, gender, we recognize that not everybody is doing so well,” said Camardelle in an interview with “Marketplace’s” David Brancaccio.

David Brancaccio: All right, when we see these headlines, I don’t know what’s gonna say late this week. But it might be that unemployment is what looks like a very low 3.6%. That’s not for everyone, it doesn’t mean that the problem’s solved with the labor force.

Alex Camardelle: That’s right, the narrative that the economy is doing well, that we’ve rebounded, that folks are recovering, is one that gives us pause. Because when we look at some of the disaggregated dynamics of the labor market, in terms of race, ethnicity, gender, we recognize that not everybody is doing so well. So for instance, if you look just at the unemployment rate, we know that while the overall rate may have fallen or may be low for everyone, generally, for Black workers it is often two times, if not more, higher. For women, it’s slightly more, right. We tend to be OK with the unemployment rate, as long as it’s low for seemingly white men in this country. And we just forget what it means for everybody else in the labor market. And that’s something that keeps us concerned, definitely keeps me up at night every month when those jobs date numbers come out. And it’s something that deserves a lot more attention in the policy space.

Brancaccio: And then you talk about, OK, it’s one thing to have a job. But it’s another thing when you have to have two or three of those jobs to make ends meet. That’s a question about, I guess, what you call job quality.

Camardelle: Exactly. So we know that over the course of the pandemic, jobs have gotten worse on one end. And in some cases, they’ve improved. For folks who entered into the pandemic in those kind of high risk, low reward jobs in retail and hospitality, you know, they’ve had to endure through the pandemic, you know, long hours, low pay, unpredictable schedules, etc. While folks who had more cushy jobs, perhaps, you know, kind of white-collar occupations, were able to return home and work from home. And while they also had other challenges, such as having to make caregiving arrangements, that might have been an issue, we know that job quality definitely varies by occupation. So again, this notion of high-risk, low-reward work is something that needs a lot more attention. Because in the work that we are in, we know that workers of color are disproportionately represented in those occupations, on the lower end of the job quality spectrum.

“If the unemployment rate was nationally what it is for Black workers right now, we would be in crisis mode”

Camardelle: So we have seen some, I guess, I would say silver lining in this idea of a tight labor market, right? So in recent months, we’ve been able to track some modest wage growth in the lower-wage occupations. So they are noticing that employers are noticing that they have to kind of compete. In a recent report, over 50% of workers reported that their employer had made adjustments to their wages or their benefits in order to keep them employed, to retain workers, and to make the workplace a better workplace, right? But that still leaves another 50% who actually reported that no changes were made. So I think while there’s modest improvements as a result of a tightening labor market, there’s still left to be seen. I would say one indicator of a tight labor market would be full employment. And while there are many controversial ideas of what full employment looks like, we’re particularly interested in seeing full employment for all workers, in particular, Black workers, again, who have disproportionately been left out of the labor market, who have unemployment rates that are continuing to be two times higher than they are for white workers. So assumedly, if we had tight labor markets, we would see Black workers involved or included in this full employment scenario and that’s not been the case. So I apply a really pessimistic view to the idea of a tight labor market, because we continue to see so many workers of color be left behind and left out of the benefits of that tight labor market scenario.

Brancaccio: I’m looking at the chart right now for March, the last data set that we got from the government on unemployment. And Black unemployment: 6.2%. I don’t think there are economists who call that full employment, right? And teenagers of all races: 10%. So you look at the breakdown and you’re not led to the notion of full employment.

Camardelle: That’s right, exactly. The point there is that if the unemployment rate was nationally what it is for Black workers right now, we would be in crisis mode. We would be back where we were in April 2020, in terms of our economic narrative, in terms of our policy response and the crisis that Black workers face, or that other workers of color also experienced, and women who have had to leave the labor force altogether experience, seems to go ignored in kind of the general narrative, when we don’t look at the disaggregated data that you just pointed out.

Brancaccio: The administration has been working to put money on the table to fix stuff that’s broken and improve important infrastructure. For people who are unemployed, to be able to get jobs based on what they’re calling Build Back Better. It’s probably a question of training, right?

Camardelle: You know, training is just one sliver of the solution in this. And yes, there are great investments that are going into training and upskilling workers to compete for jobs through the infrastructure bill. Which is now facing implementation at the state and local level, right? I really am proud and happy with a number of the investments going into helping folks prepare for jobs in construction trades, as well as in manufacturing. And then there’s a specific focus on the green economy. And all of that is really wonderful. What we are really cautious about is this notion that training is the silver bullet in this. There are many other factors that contribute to lower quality work, that contribute to higher rates of unemployment, the lack of skills is one factor. But there are also issues like the lack of care infrastructure, right? You know, where folks need to have support to take care of their kids, or to take care of their elderly family members or sick family members. We live in a country that does not guarantee access to paid leave or sick leave. And the cost of childcare alone is enough to bankrupt families, right? We also know that racial discrimination still plays a significant role in occupational segregation, as well as in hiring discrimination as well. So for instance, we know that white job applicants received 36% more callbacks than Black job applicants seeking out the same job. So while training is a sliver of the issue, and possibly investments in that are going to go a long way, we can’t ignore that it’s just a portion of what’s holding back workers here. There are far more systemic issues that deserve our attention as well.