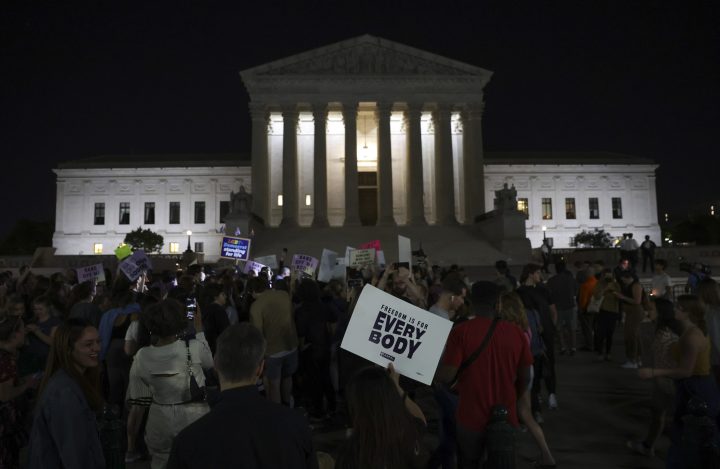 David Brancaccio and Alex Schroeder May 3, 2022
Heard on:

COPY
Pro-choice and anti-abortion activists rally outside of the U.S. Supreme Court on May 02, 2022 in Washington, DC. Photo by Kevin Dietsch/Getty Images

David Brancaccio and Alex Schroeder May 3, 2022
Heard on:

Pro-choice and anti-abortion activists rally outside of the U.S. Supreme Court on May 02, 2022 in Washington, DC. Photo by Kevin Dietsch/Getty Images
Listen Now

The leak of a draft of a Supreme Court majority opinion indicates that the court is poised to overturn the landmark Roe v. Wade decision. An official ruling is due to arrive in about a month, and when it does, about half of the U.S. will have restrictive abortion laws in force or ready to be implemented.

Economists have studied the downstream effects of restricting abortion. One of them is Caitlin Knowles Myers, who joined other scholars in submitting a briefing to the Supreme Court with this data. Myers spoke to “Marketplace Morning Report” host David Brancaccio this morning, and the following is an edited transcript of their conversation.

David Brancaccio: Does it affect earning power? How have economists thought about this?

Myers: When abortion access is limited and travel distances to providers increase – as they will for a lot of American women in a post-Dobbs world if Roe is overturned – we know that a substantial number of women can’t get there and give birth as a result. So that’s the first step of the economic evidence. The second has to do with the linkage between motherhood and women’s educational aspirations and economic lives. And that link is quite strong as well. In fact, motherhood is the single largest explanatory factor for gender gaps in labor market outcomes. For instance, you see that men and women’s earnings actually trend fairly similarly, up until the point that they become parents, and then not much happens for men, and women’s earnings really fall off a cliff and decline by about a third and don’t recover in their working lifetimes.

Brancaccio: You advised the Supreme Court justices about this in the front of the court brief. You’ve looked through this draft majority opinion that got out overnight. Does that opinion address this economic connection?

Myers: No, it doesn’t seem to and I and I will emphasize that my understanding is it’s a draft, but I was quite surprised to see the court, in that draft, address this question of what’s called in legal terms “societal reliance,” which I will describe as an economist as the question: If Roe is overturned, will there be an impact on people’s lives? And the court essentially, in this draft opinion says, “Oh, it’s hard to know.” And they cite a brief by 240 people who characterize themselves as women’s scholars, none of whom I recognize is working in the field of studying the causal effects of abortion access, and they don’t cite or discuss the substantial evidence that more than 150 economists submitted, that’s arising from decades of rigorous peer reviewed research suggesting that, yeah, we do know the answer to this question.